In 2005 Howard Stern and the show were profiled on the most prestigious of shows, “60 Minutes“. Ed Bradley and his producer Ruth Streeter (and an army of camera people) covered an entire show morning and followed that up with an extensive interview with Howard.

This week on Mastertape Theater we replayed some of the on air moments caused by the 60 Minutes crew simply being around our guys. 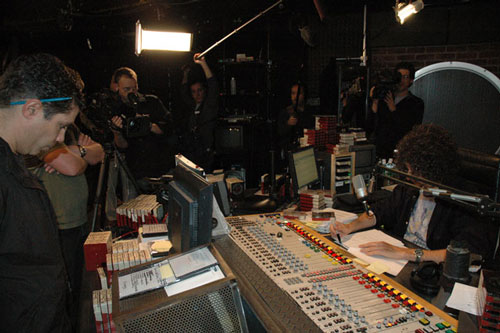 For example, Gary was goofing on Benjy for all of a sudden feeling a burning desire to stand up and give Howard some creative ideas during a commercial break (Benjy swore he did that sort of thing all the time. Gary said he was just showing off for the cameras).

And the newly hired Sal the Stockbroker was driving Gary up the wall with his antics – all presumably to get on camera. (It worked! See Sal push a wall of carts on Jason halfway through the video).

See for yourself – watch the video here!