Tune in to the Stern Show fantasy draft on Howard 101!

Are you ready for some (pretend) football?! Well I am, and as commissioner of the Emotional Friends Fantasy Football League the start of the season cannot come fast enough.

We had our draft very, very early this year. A lot of factors went into that. I wanted everyone in the same room because it’s fun, and we wanted to record it for the special the Howard 101 special debuting today. But everyone’s schedule is different and this was the only time we could make it work.

So when someone picks up Jordy Nelson in the second round, or Tom Brady in the 8th, you’ll understand why. As to why JD made some of the picks he did, no one will ever understand…

But the reason I cannot wait for the season to start is that being the Commissioner of the league (League Manager is what ESPN calls it. God is what Roger Goodell used to call it) is not fun at all, and by having our draft so early this year I’ve had to deal with a full month of whining and complaining (some justified) and there isn’t even goddamn football to distract me from the misery!

You’ll hear the genesis of a lot of these complaints on the special. Mostly dealing with Michael Rapaport and his seemingly inability to draft a team without a cadre of children, lawyers, former players, sports radio hots and god knows who else standing behind him.

So he’s treating Lisa like he treats everyone else.

Look, I know what you’re thinking. If you don’t play Fantasy Football you figure you don’t care about this special, and if you do play you know you don’t care about anyone else’s team or league but your own. I get that. But it’s not about fantasy football, it’s about a group of people sitting around busting balls and trying to act macho in a room where our host, ESPN’s Robert Flores, was far and away the most macho person behind a mic.

So sit back and enjoy this special. It’s really a lot of fun and the reason I love playing fantasy football. Despite the headaches, when I look around the room, I see the types of guys and girls I want to be in fake foxholes with in fake games in fake situations for absolutely zero money. 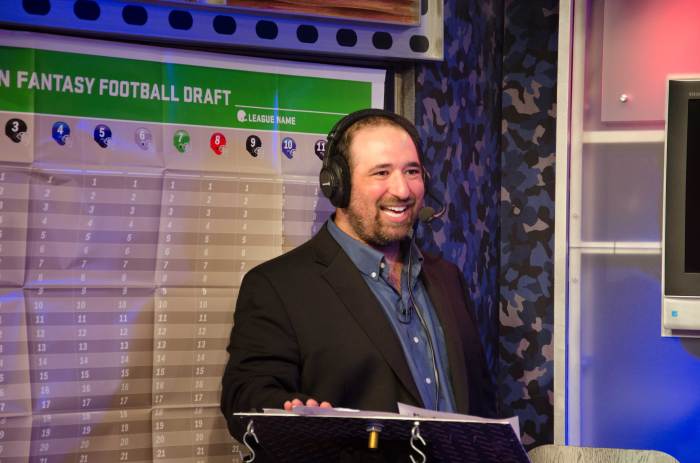 See all the photos from the draft here …

Celebrity superfans join members of the Stern Staff for the 8th Annual “Emotional Friends” Fantasy Football League Draft. The only things more exciting than the draft itself are the trash-talking and epic insults.

Tune in to Howard 101 Wednesday September 9th to hear the drama unfold!