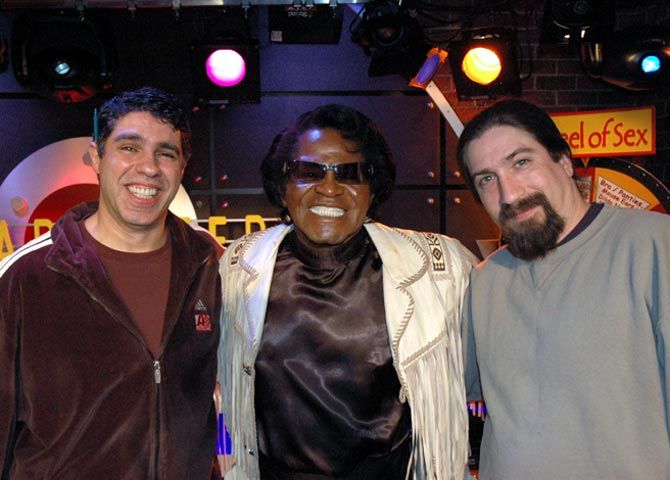 The legendary James Brown came in today to promote his new book “I Feel Good” out in stores now and also to promote his new VH1 show, “James Brown Inside Out”. He came in with wife Tomi Rae, whom everyone thought he’d divorced. Howard said James had even taken an ad out in the paper announcing their separation. James and Tomi said they had just had a fight and it was over now and everything was fine.

Apparently, Tomi had accused James of threatening to kill her with a chair and she called the cops and James was taken away. James pointed out how he had Tomi get a makeover recently. He thought her ass was too flat, so he had her get fat put into it to make it bigger. He knew exactly how he wanted it, so he had drawn a picture for Tomi to take to the doctor. They ended up using some fat they took from her stomach to give her a nice, big, round ass. Just the way James likes it. James is very happy with the results. Tomi said even though she’s much younger than James is, she can’t keep up with him sexually. She said even once a day is not enough for him and that’s about all she can handle. She said he’s been even worse since she got her new ass.

Howard suggested Tomi get an extra girl to live with them to help take care of James in that department, but neither of them liked the idea. James said he’s old fashioned that way, and although he’s been with a lot of women in his life he’s never had two girls at once. Howard suggested he try it. James kept telling Howard how much he loved and respected him and thought his move to SIRIUS was going to be a great one. James has had his own FCC trouble before. The FCC had taken away the licenses he had for three radio stations, (although he didn’t say why specifically). James is also into colonics now and promotes the benefits of colonics during his stage show. James said he lost a ton of weight when he had his. They had pulled out some black crap from his stomach during the procedure, which James blamed on too many years of steak and red meat.