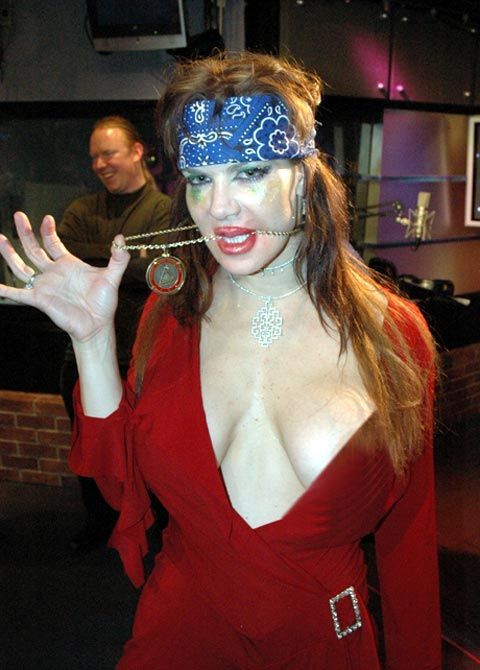 Howard said he had talked to Chyna and her brother during a commercial break and had made some recommendations he hopes they follow. Howard replayed the song she sang live in the studio on Friday and then played a clip of her singing him Happy Birthday, a la Marilyn Monroe.

After her interview, Sal the Stockbroker asked her some intelligence questions and the guys bet on what she would and would not know.

#1 – The Mona Lisa was painted by which famous artist? Howard said there was no way she couldn’t know this, no matter how out of her mind she was. Artie bet him $20 that she wouldn’t know it and the winner was?..Artie! She said she had no idea who painted the Mona Lisa. The answer, for the few of you who don’t already know, is Leonardo Da Vinci.

#3 – Spell “DIARRHEA”. Howard said he couldn’t spell diarrhea so he didn’t expect her to be able to do it either. Everyone else felt the same way and they were right, she spelled it “D-I-H-A-R-E-H”

#4 – What does Carpe Diem mean? Robin thought she’d know this, so she bet Howard $20 on it. Chyna started her answer by saying she knows it’s a French expression. Immediately, Robin knew she had lost the bet. Carpe Diem is a Latin expression, not French. Chyna said she didn’t know what it meant, so Howard won the $20. The correct answer is, “Seize the Day”.

#5 – A cardiologist specializes in what part of the body? Everyone thought she’d know this one because she’s so into health and fitness and they were right. Chyna said heart. Artie said after her last appearance, it’s easy to see that she’s clearly a health nut.

#6 – What does DVD stand for? Again, no bets, but she got it wrong by saying Digital Video Display. The correct answer is Digital Video Disc. [GEEK NOTE: It actually stands for Digital Versatile Disc]

#7 – Who was the President of the United States during the Civil War? Both Howard and Robin thought she wouldn’t know it and bet Artie $20 each. Artie was the big winner this time when Chyna answered the question correctly, Lincoln.