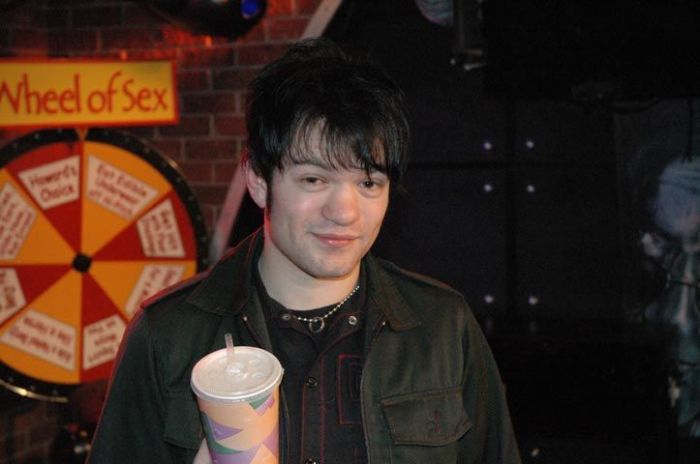 Deryck Whibley from the band Sum 41 came on to promote the band’s new album “Chuck.” Howard noticed right away that Deryck dyed his hair black. Deryck said he liked it better than blonde. Howard said he read in Deryck’s notes that he’s tired of going to strip clubs. Deryck said they are all the same and that he’s kind of bored with them. He never thought he’d get bored seeing naked women but now he is. Howard said he’d take him to Scores and show him a real good time at a strip club, just to get him back in the swing of things. Howard said that he bet Deryck’s attitude about strip clubs comes from his girlfriend, Avril Lavigne. Deryck laughed and denied that, and said he didn’t want to talk about his relationship with her. He said that information is private. He did talk about dating Paris Hilton though. He said he had sex with her on their first date. Howard suggested maybe he should have married her because she’s a millionaire. Deryck said the “hung out” for six months but never dated exclusively. Howard told Deryck that he’d be the man if he could bang Paris and Avril at the same time. Deryck said he didn’t think he could put that together but he has had two girls at once before. He said he’s slept with well over 25 women but doesn’t have a figure. He’s never slept with a black girl or Asian girl before though. He said appreciates everything he’s getting with his fame and doesn’t want to question it. Deryck said the new album, “Chuck,” was named after a United Nations volunteer who saved the band’s lives while they were in the Congo filming a documentary. Howard said it was cool that Deryck cared about stuff. He said that was the Canadian in him.