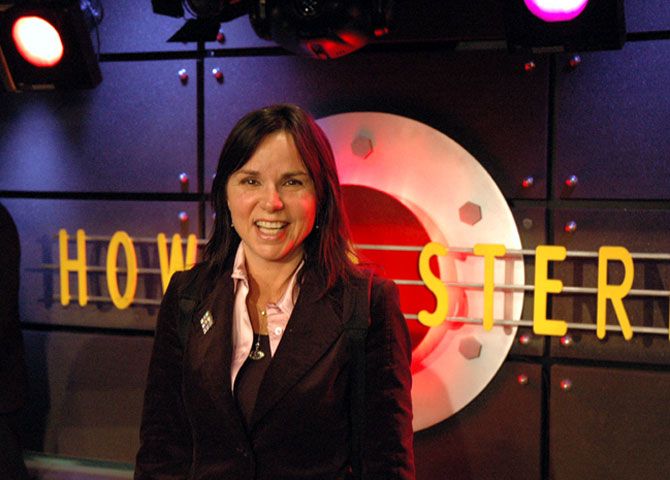 Howard had musician and friend, Patty Smyth, in to promote the reunion of her band, Scandal. Patty got on the show in an unusual way, though. Patty has been on the show many times in the past and has sung, done interviews and more. However, when Gary was recently pitched the idea of having Scandal on to perform live, everyone decided to pass on them because the show rarely books musical guests anymore. Gary called the people at Westbury Music Fair, who had originally tried to book the band on the show and, in an attempt to be nice, told them that the show is not booking bands right now and the few bands that are booked are usually more contemporary to please the program directors. That led to Patty calling Howard directly and left a “blistering” phone message, blasting him for passing on her because she’s “outside the demos.” Howard played the message with Patty in the studio. In it, she yelled about how sad it was to tell her she wasn’t in the right demographic and that it’s f*cking bullsh*t and she guesses that Howard is too big for her now. After playing the message, both Patty and Robin said they wouldn’t describe that message as “blistering.” Patty said she thought she and Howard were friends and Howard said they are! Howard said that she was taking them not having Scandal in the studio too personally. Patty said she just wanted a straight answer, that’s all. Robin agreed, saying she’s either his friend or she isn’t, but if she is, he can tell her the truth. Howard told Robin he’s obviously not that much of a complete human being. He’s not as bad as Jay Leno — who Howard joked is an automaton — but he’s pretty bad. Howard and Patty went back and forth over what happened between them and it basically boiled down to: a.) Patty thinking she’d have no problem getting booked on the show and was surprised when she didn’t, or b.) Howard just not wanting to book the entire band to come in and play. After that they declared the friendship was repaired. Click here for Scandal’s tour dates.

Howard said Patty’s husband John McEnroe must have gotten an earful of Patty’s ire over not being booked on the show because John gave Howard a big stare down at the gym the other day. Howard said he just laughed, though. Howard asked Patty how John is dealing with his TV show being canceled and Patty said he’s doing fine. He’s home all the time now and that’s why she finally wants to get back out on the road. She said she didn’t realize when she married John almost ten years ago, that his three kids would be moving in with them. She already had one of her own and then ended up having two more kids with John. Thus, she’s been raising six kids for the past ten years and is finally sick of cleaning up other people’s puke. That’s why she’s dying to get out of the house. She then declared — out of nowhere — that her husband has the biggest penis she has ever seen. She called it humongous. Howard asked if it hurt to have sex with him and she said “not anymore.” Howard said he’d have to take a better look at John in their gym locker room. Before the interview ended, Patty told Howard to call her whenever he needed advice on anything. Howard said he’d call her to find out how to handle a very large man.