Pushing ‘Til the End

Former New Jersey governor and longtime friend of the show, Christy Todd Whitman, called in to say goodbye. Gov. Whitman told Howard that he’s always been supportive of her, and that she’s happy he’s going to a place where he’ll be allowed more artistic freedom.

Robin replied that, given the lack of censorship at SIRIUS, she thought this was the last time they’d hear from the governor, but the governor assured her that wouldn’t be the case. Howard added that just because he won’t face restrictions on satellite doesn’t mean he won’t act appropriately around important people like Gov. Whitman.

Most Famous Bathroom in New Jersey 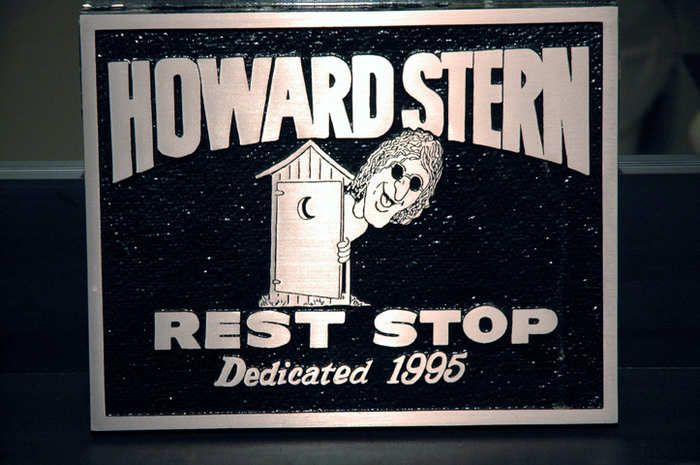 Howard recalled that he endorsed Gov. Whitman’s first campaign after she called into his show, and encouraged all his New Jersey listeners to vote for her. Gov. Whitman mentioned that, thanks to Howard’s help, she was the first woman governor of the state, as well as the first challenger to beat an incumbent in a race for governor since New Jersey changed its constitution.

Howard proceeded to point out that during her campaign, Gov. Whitman promised to name a New Jersey rest stop after him if she was elected, a vow which, much to his surprise, she kept. Gov. Whitman noted that she took some flack for her decision to do so, but that her detractors simply needed to lighten up. Howard then mentioned that a fan of his stole the sign from the rest stop and sent it to him, and that he didn’t make the governor put it back on the building. Gary made sure to point out that Gov. Whitman dipped into her own pocket to pay for the sign, and that she didn’t use state funds for the project.

Howard talked about the fact that Gov. Whitman spent time working for the Environmental Protection Agency under Pres. Bush, but that she ended up leaving the post. The governor explained that, although she didn’t agree with many of the president’s political stances on the environment, the main reason she resigned was because neither she nor her husband liked being in a long-distance relationship.

The governor went on to say that Pres. Bush has made some decisions that have negatively affected the environment, but that she feels he has done so just to please his political base. Howard commented that he believes the president does the same thing with topics like abortion, and that he’ll say whatever he needs to say in order to keep his biggest backers happy.

Although Gov. Whitman has been a supporter of the show, Robin brought up a time she thought the governor was anything but supportive. Robin said that during one of Gov. Whitman’s appearances on “Politically Incorrect with Bill Maher,” she put down the show and denied listening to it.

Gov. Whitman responded that she believes Howard should be free to say what he wants and that people who don’t like what he says have the right to turn off their radios, but admitted that she doesn’t listen to the show. The governor went on to note that she never insulted Howard or anyone else during her time on “Politically Incorrect.” After Howard played the tape of the segment, Robin acknowledged that she was mistaken and that Gov. Whitman didn’t say anything bad about the show.