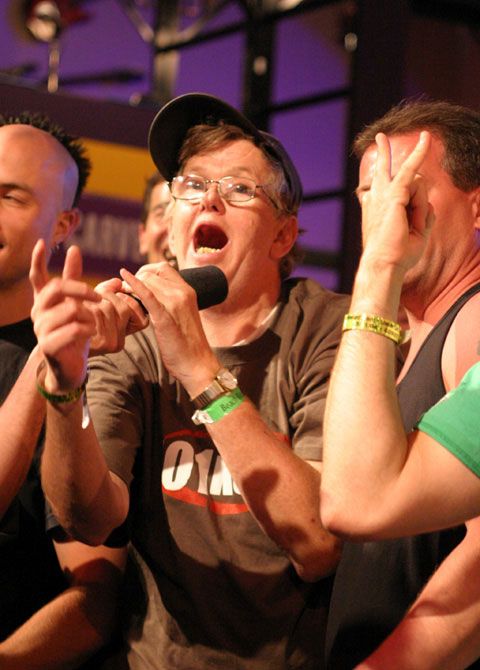 Pot Head and perennial Jet’s fan, Bong Hit Eric, called in today to talk about Howard’s interview with Baby Spice, (which just ran on the E! show). Howard asked him if he wanted to play a new game from Sal the Stockbroker called “Retard Memory”. Sal called Gary the Retard and told him a bunch of short stories, then quizzed him on some specifics to see if he remembered. Eric would have to guess whether or not Gary knew the correct answer.

Eric said he was ready to play so here’s how it went: #1 – Fred Norris is from the Planet Mars. Howard has been saying for years that he thinks Fred is a Martian. What planet is Fred from? Eric thought that Gary would know the answer to this one. Unfortunately for him, Gary answered “Planet!”

#2 – Gary loves chocolate, not caring that it makes his ass fat and everyone laughs at him. What does Gary love? Eric thought that Gary would know it and he was right! Gary said “chocolate”. Robin said she thought she might have figured out retard logic. She thinks that Gary remembers stuff that he likes, like chocolate, but doesn’t remember stuff like Mars. #3 – Robin loves her horse, Blaze. She keeps him in a stable and feeds him every day. What is the name of Robin’s horse? Using Robin’s new “Retard Logic Key” Bong Hit said Gary wouldn’t know and again he was right. Gary the Retard said “Spot”, (which was an answer to a previous question Sal asked Gary to set up the game). #4 – Richard pleasures himself every Friday. He only does it once a week as part of a special ritual. What day does Richard pleasure himself? No one — including Eric — thought Gary would get this right and?.they were wrong! Gary correctly said Friday. #5 – Howard takes Beth to Nobu to eat sushi. He also takes her shopping for clothes and on vacations. Where do Howard and Beth eat Sushi? Artie said he bet Gary would say chocolate. Eric said Gary wouldn’t get this right and he was right! Gary said, “Italian food.” For his efforts, Eric won a trip to the Grammy’s! Eric took a congratulatory hit off his bong for his big win. Artie joked that Eric will probably miss his flight to the Grammy’s because he’ll be so stoned.