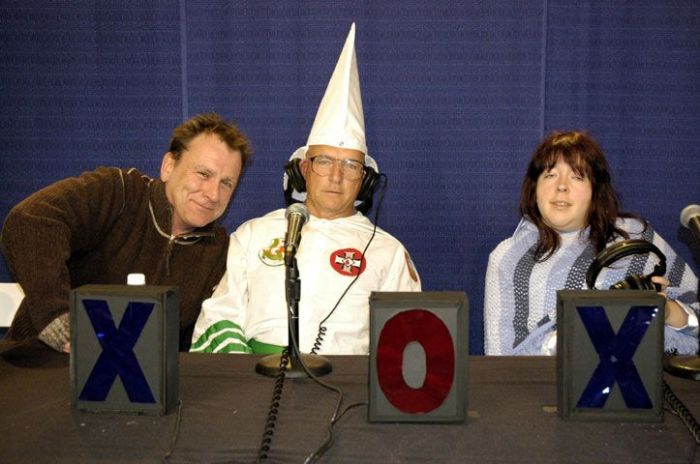 Howard played a great phone call recording today. It was KKK member, Daniel Carver on the phone with Gary the Retard and Wendy the Retard. Wendy asked Daniel what he thought about the Michael Jackson case and of course he started throwing around the “N” word. Gary said it too but surprisingly Wendy started saying it a lot as well. Howard was surprised because Wendy used to seem uncomfortable Daniel’s racism but now she seems to embrace it.

Later in the show, Howard got Wendy on the phone and decided to do an intervention with her. He explained to Wendy that the “N” word can be very hurtful to people’s feelings and that she should consider that before she uses it. Wendy admitted that Daniel was influencing her and telling her to use that word more. Wendy said that she thought Daniel was trying to get her and Gary to join the ku klux klam (yes klam). Howard said that he thinks even Daniel was taken aback but how much she used it during the call. Wendy said she would try to not use it as much and said she really wanted to be more like Robin and less like Daniel. She said she doesn’t hate black people and loves black musicians like Nelly and Usher. A fake Michael Jackson called into the show and told Wendy to stop calling the “N” word and then called Wendy a bitch. Wendy, thinking it was the real Jackson, apologized to the caller. Then Howard pretended he was Jackson and said he was really hurt by Wendy for being so racist. He said he was going to sue her for calling him the “N” word and saying he molested little kids. She apologized again and said she was just giving her opinion. Then Howard, as Michael Jackson, asked Wendy if she’d have phone sex with him and she agreed. He asked her to describe her ass and she said it was big, clean and hairy. Howard then asked her to rub the phone on her ass which she did, creating a loud, scratchy noise. Howard as Michael Jackson pretended to finish with Wendy on the phone and then thanked her for a good time. He then said he’d have to give Daniel, Gary and Wendy their own show at SIRIUS because he could listen to their phone call all day.