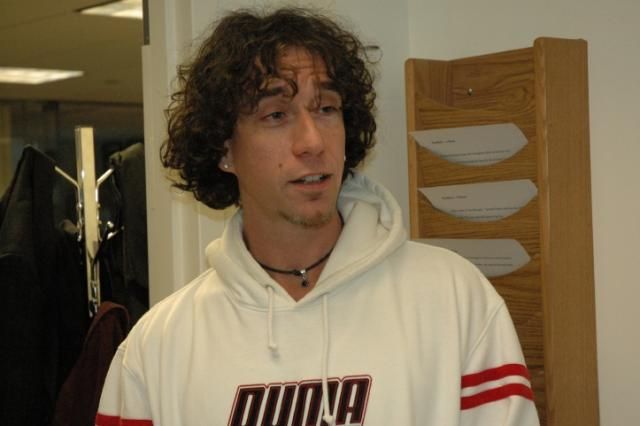 Ralph Cirella called in today to talk about the fight he got into at Scores the other night. Howard had to tell the story without Ralph the other day because no one could find him but Ralph was here to give his version this morning. He said that he had been drinking a ton on an empty stomach that night and was loaded by the time he got to Scores. He was hanging out in the Champagne Room with Big John and they were horsing around with each other and getting physical. Then Ralph felt someone push him in the back and Ralph turned around and “playfully” swung at the guy.

Ralph said he tried to pull his punch but knew he hit the guy too hard. Then the guy, Rick, punched him in the stomach hard and Ralph said “F you!” Rick said “F me?” and then punched Ralph in the face. Ralph didn’t think it was that bad at first because his stomach hurt more than his face, but then realized he was bleeding pretty bad. That didn’t stop him from staying the rest of the night at Scores though. Ralph said his face blew up pretty bad but it’s better now. Lonnie from Scores called in and told Ralph that he’s lucky because usually the guy who throws the first punch is usually lucky to survive at all. Ralph seemed insistent though that the guy pushed him, although he admitted they were horse playing around.

Howard wanted to know why he was playing with a bunch of guys at Scores in the first place. Big John and Rick, the guy who hit Ralph, called in with a different version of the story but it all boiled down to pretty much the same thing. Ralph did agree that he should stop drinking though, to avoid these problems altogether. He joked that he was going to stop drinking – at least for the rest of the week.