DON'T TALK - UNLESS YOU'RE TELLING A HOT LESBIAN STORY 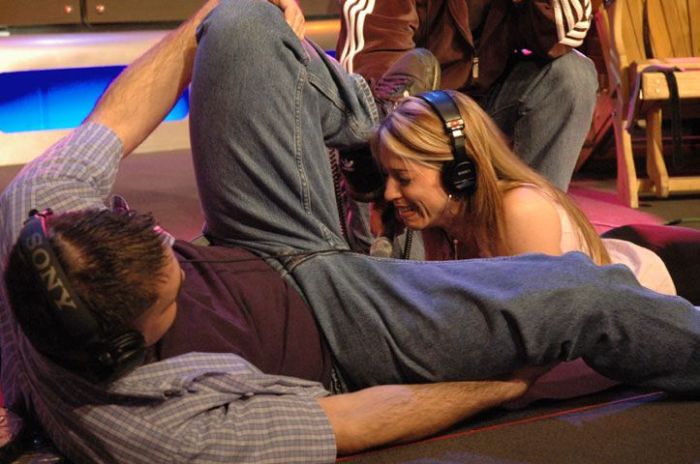 Photo: The Howard Stern Show
During the interview, Jamie finally hit upon a subject the guys didn’t mind hearing a lot about – her various lesbian experiences. She said the first girl she was with was a 200 pounds bull dyke. She said she went for her because she figured it was pretty close to being with a man, but she ultimately didn’t like the experience. She also once did it with a girl in front of her boyfriend who was passed out at the time. Her most recent lesbian experience was with a girl she met online. They had a few dates and then got it on in a car. They parked the car in a neighborhood and got in the backseat and went from there. Howard and Artie thought she might be a lesbian, but she insisted she wasn’t. Howard was about to rap up the interview when Jamie mentioned she still lives at home because she couldn’t afford a place by herself yet. Howard then tried to negotiate with her to get farted in the face for money. Will the Farter was there and Howard said he’d give her $1000 to get farted on 500 times. Jamie tried to negotiate it down to 100 farts but Howard insisted. First she was lying on her stomach with her face near Will’s crotch as he lay on his back with his feet in the air. Will let out some long and loud farts and everyone was moaning and laughing, but Jamie kept her face in place. Then Howard had them switch positions so that they were both on their hands and knees and Jamie had her nose right by Will’s ass. He let out some more great farts and Jamie was able to earn her money. Howard congratulated her and then said if she could learn to shut up 50% of the time, she’d probably find herself a good man.
Previous Show Next Show