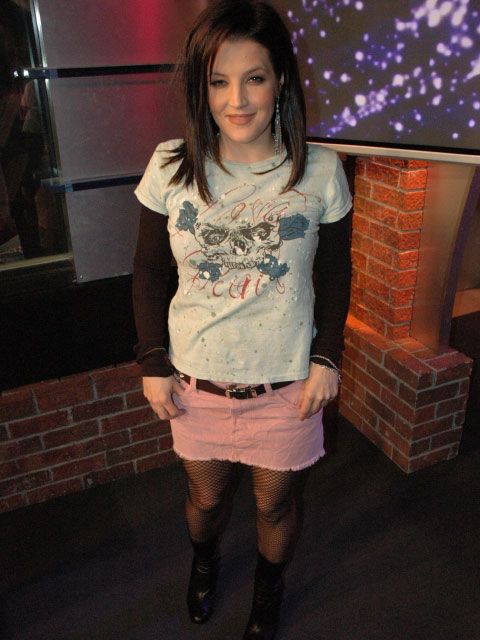 Lisa Marie Presley came in to promote her new album “Now What” that’s due out April 5th.

Howard said she looks good despite the fact that the tabloids had recently reported her to be overweight. Her theory was that the tabloids wanted to paint her to be heading down the same path her father took near the end of his life. Howard asked what her father would have done if he was alive and she brought Howard home?

Lisa’s been with her current boyfriend for a year and a half and is very happy. Howard said she shouldn’t get married again as it will never last because she’s not the marrying kind. She claimed that this relationship WOULD last, even though Howard brought up her 3 previous marriages, which obviously didn’t. Lisa talked about how her 16-year-old model daughter is a good kid and has a good head on her shoulders.

Howard thinks it’s going to be hard to keep her in line because she’s so hot.

Gary Dell’Abate came in to ask about a guy her mom used to date who wrote a book after they broke up in which he said he was attracted to Lisa Marie when she was developing physically, between the ages of 12-15.

She confirmed this and said that he used to come into her room at night, but she never let it go anywhere and that it was disgusting.

Howard talked about her Scientology faith, which other celebrity Scientologists she’s friends with and how often she hangs out at the Scientology center.

Ralph called in to remind Howard of the last time she was on the show, Howard had thought she was very into him then and thought he could’ve gotten her if he wasn’t with Beth. Then they saw her on Letterman and she was saying the exact same things to Letterman that she had been to Howard!

The guys joked that she probably did the same thing to Dan Rather and Larry King too. Howard played a track from her new CD called “Idiot,” and asked if it was about Michael Jackson.

She said it was about some guy she dated who wasn’t famous; she had just had enough of him. She said she’s glad there’s a SIRIUS Satellite Radio because she thinks her CD won’t get a lot of radio play. Howard joked that if she was “nice” to him and puts out a little, he’d get her CD played every day.