Jimmy Kimmel Sits In on the Show and Talks Marriage Prospects 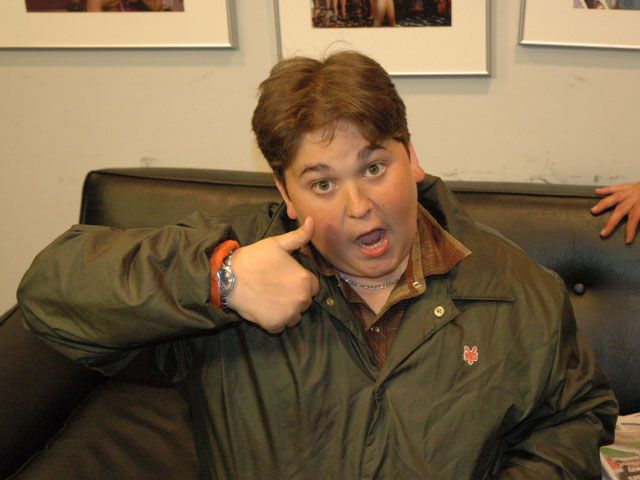 Howard said that Adam Carolla, Jimmy’s old “Man Show” buddy, is getting his own show on Comedy Central and it might go head to head with Jimmy’s show. Jimmy said he hopes they don’t go up against each other but he wished Adam a lot of luck.

Jimmy said he’s also producing a new show for MTV that centers around a “kid” named Andy Milonakis whom he discovered on the internet. Jimmy said this “kid” made some really funny videos of him singing weird songs and bothering old people on the street and then put them on the internet. Jimmy had him on his talk show a lot, at least until ABC put the kibosh on him for content reasons. Apparently Andy made a few September 11th jokes that didn’t go over too well.

Jimmy brought Andy with him to the show today so he came in to say hi. Robin wondered how old Andy was but he just made a joke about being 72 and never said how old he was. Andy said he was in character on his last Jimmy Kimmel show appearance – dressed as a black woman – and then made a crack about Sept.11 being a holiday. That’s when ABC pulled the plug on him.

After Andy left the studio, stylist to the star, Ralph Cirella called in to say Andy was annoying. He then joked that Andy’s show sounds like another Kimmel “smash”. He also had a laundry list of things to talk to Jimmy about, mostly what he likes and doesn’t like about Jimmy’s show. Jimmy got really defensive and asked Ralph if he had to write all these points down before calling in.

Ralph asked Jimmy why he doesn’t put any effort into his talk show and Jimmy asked Ralph exactly what it is he does for a living. Ralph just replied “whatever”. Howard said that Ralph picks out his clothes for the show and packs his bags for trips. Ralph then complained about how Howard sometimes leaves tissues in his pockets and that when Ralph goes to wash his clothes the tissues get all over the place.

Howard suggested that Ralph check the pockets first, at least it would give him something to do. Howard then said he feels bad sometimes because Ralph has to clean his underwear. Ralph told him not worry though; he wears plastic gloves when doing Howard’s laundry.