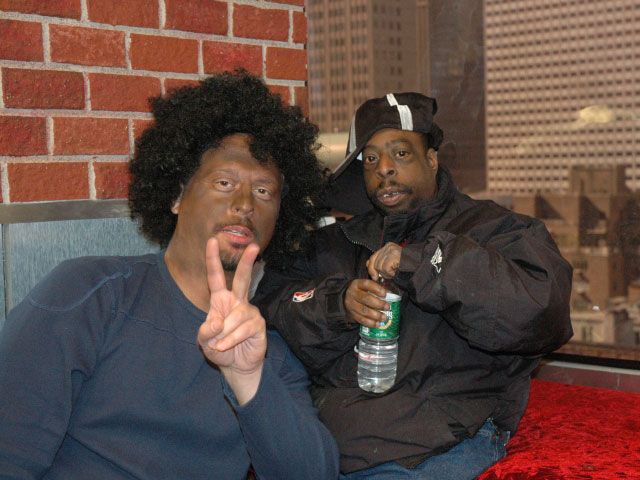 Beetlejuice came in to promote two appearances, one today from 11:00 am – 1:00 pm at the John’s St. Bar and Grill in NYC, and The Beetle Bash, where he boxes with some fellow Wack Packers, on May 14, at the same place. He said he’ll just be “chillin'” there today.

He was in a really foul mood this morning and didn’t want to come in at first. He said he was pissed because they were talking about him wearing a diaper. Sal came in and apologized to Beet, saying he is a superstar and a comedic legend, promising he’d never bring up his diaper again. Sal even dressed up like Beet in honor of the great comedic mind he has. Beet accepted his apology and said he’d “let him slide.”

Still, Beetle wasn’t too talkative today, only giving short answers to everybody’s questions. Some new information we learned about Beetle today was that his birthday is May 34th and is turning 34 since he was born in 1936.

Howard said Gilbert Gottfried came by today and asked Beetle if he wanted to meet him. Beetle said he didn’t know him and didn’t want to know him.