George Lopez Has a Super Kidney

George Lopez Has a Super Kidney 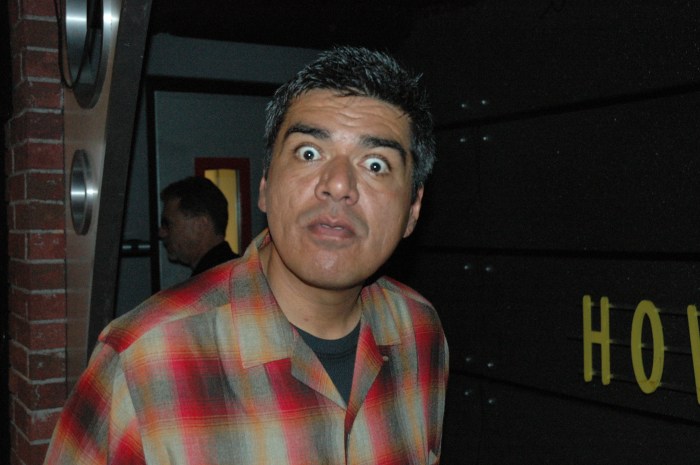 The star of ABC’s “The George Lopez Show” and the upcoming film, “The Adventures of Shark Boy and Lava Girl in 3D”, George Lopez dropped by today. George told Howard he was a huge fan and proved it when he declared that Howard’s Channel 9 show was the original reality TV.

Howard wished he still had the rights to those shows because he would release them on DVD, but he doesn’t. Howard read that George recently received a kidney transplant from his wife. George said this was true and that if he hadn’t he could have died.

George said his kidney problem stemmed from a congenital disease that caused him to have to pee all the time and subsequently he wet his bed a lot. He said his grandmother used to hang the stained sheets out on the line to dry like a flag that let everyone know about his nighttime issue. He always tried to hold it as much as he could and as a result, his current kidney problems were caused by urine backing up into his kidneys.

George told Howard he ha a tough childhood after his father left when he was two months old and his mother married a 60-year-old guy a few years later, leaving George with his grandmother. He said he hasn’t really had much contact with either since. George said he had gone to the doctor earlier this year and he told him that his kidneys were functioning at 18 percent and barely even showed up on the sonogram. He also told George he didn’t know how he could be walking around. George said that he and his wife both knew she would be a match for the transplant before they even did the tests. He said that not only was it rare to find such a great match but his wife has an even rarer condition with two arteries running into her kidneys instead of the usual one. This means George now has a super kidney!

The Man’s Not Home

George said that he’s cleaned up his life a lot since getting sick and getting his new kidney, although he wasn’t always that way. He said he once blew a 2.3 on a breathalyzer, which he thought was funny because his grade point average in high school was 2.2.

George told Howard he’s the only Mexican on his block but that his house is the biggest in the neighborhood. George bought his home from the Olsen twins and he told Howard he’s surrounded by other stars, including Jennie Garth, Jennifer Love Hewitt, Damon Wayans, and Andy García.

Howard asked George about the upcoming kid’s movie, “The Adventures of Shark Boy and Lava Girl in 3D” in which he plays a couple of parts including the bad guy. George said the film is directed by Robert Rodriguez, who also did “El Mariachi,” “Desperado,” and “Spy Kids.” George thought Rodriguez was a great filmmaker and Howard said he had heard that Rodriguez financed “El Mariachi” himself. George said the 3D effects in the movie were great and Howard recalled having done some 3D himself on his pay-per-view special, “Butt Bongo Fiesta.”

George told a funny story about the time he was having work done on his house. The construction crew he hired was mostly Mexican and one day George found a bunch of the guys hanging in his swimming pool. Because George is also Mexican, the guys didn’t think he was the owner of the house and they told him to jump in because, “the man wasn’t home.” George thanked Howard for having him on and told him this appearance was better than the time he was on “The Tonight Show” with Johnny Carson.