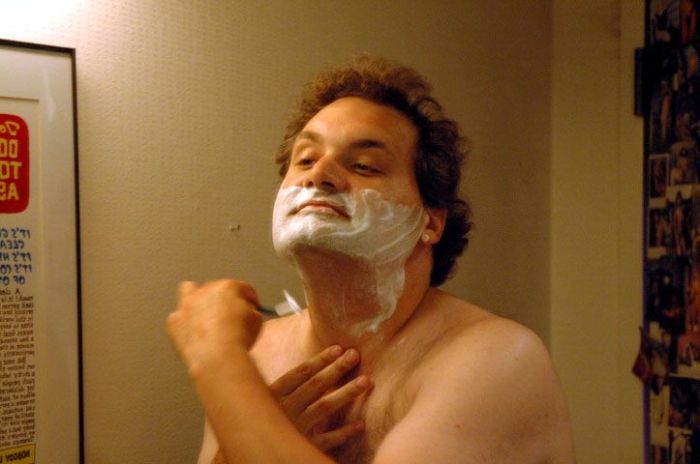 Photo: The Howard Stern Show
Artie said he shot a love scene for “Beer League” the other night with his movie “girlfriend,” Cara Buono. He said he was unshaven and wearing a guinea tee and the scene takes place in his room in his “mother’s” house under an AC/DC poster. He said both Dana and Cara’s boyfriend were on the set at the time. Howard asked how many takes they had to do and Artie added up 5 takes from 2 different angles meant 10 takes total. He did add though that they kept their mouths closed when they kissed. Howard said her opened his for his on screen kisses in “Private Parts”. He said he knew it was getting to his co-star, Mary McCormack, because she used to have to pick his fake moustache hairs from her mouth between takes. He said he really wanted to get Mary, but he was married at the time. Artie remembered his kissing scene from the “Bachelor” was really bad because he and the actress playing his wife didn’t really like each other at all. He said the director had him dip her when he kissed her so it at least looked a little passionate. Artie said he was really looking forward to today’s scene as they were shooting the bachelor party scene, which meant there would be a lot of topless women on set today. He said the only bad thing was he had to shave at the station before he left today. Robin asked if he was afraid of getting some kind of disease by shaving in the notoriously disgusting bathroom at KROCK. Artie said he was a little, plus it was hard to get the water hot enough here for a real shave. Robin suggested he have an intern boil some water for him. Howard noticed that Artie was using a date book. Artie said he used it to keep track of all his meds and also to keep notes in. Howard said he recently realized his day planner was from 1996, but thought it looked cool so he kept it.