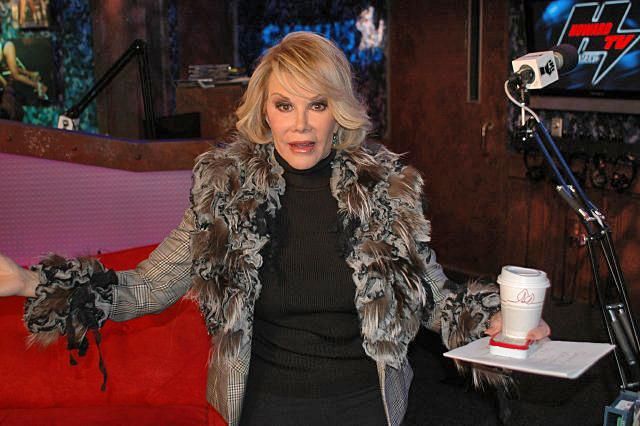 Joan Rivers came into the studio and right away told how she owned some of Vincent Price’s ashes. After Howard claimed he had one of President Kennedy’s toes and Artie said he had Jackie Gleason’s liver, Joan noted she was comforted by Vincent’s ashes.

Joan then explained she was so close with Vincent that she called his daughter to make her request for the ashes, and that she didn’t have a problem asking for them. Joan added she possessed the ashes of all her dogs, her husband, Edgar, and his mother, plus Vincent and his wife, and they were all stored in her closet. Howard went on to ask Joan about the woman who opted for the mastectomy to avoid getting cancer, and she replied she thought the woman should be able to do whatever she wanted to her body.

When Howard asked Joan about the controversy surrounding Madonna’s attempt to adopt an African baby, she told him that if Madonna wanted to adopt “a starving black child,” she should’ve adopted Nicole Richie. Joan went on to say she thought the problems Madonna was having with the adoption process were “ridiculous,” and that she supported her efforts.

Joan acknowledged she had older men who used her for sex, but that she was always nervous disrobing in front of them. Joan then noted she believed her daughter, Melissa, had a great body, but that she refused to show it off, even turning down the opportunity to be in a recent issue of Playboy. Joan also said she couldn’t even look at Mel Gibson since he made is anti-Semitic remarks. However, she did love her grandson and she found him “hot” even though he was only 6 years old.

Joan commented her new show, “Before Melissa Pulls the Plug,” was on at 10 o’clock tonight on Bravo, and Howard told her he has read positive reviews about it. Joan then claimed she didn’t have many celebrity friends, but talked about how she was personally invited by Barbara Streisand to attend one of her concerts, although she couldn’t go because she was working. Joan admitted she spent “a lot” of money every year, so she wouldn’t be able to stop working and still live the lifestyle she is accustomed to. Joan then said she planned on living until she was roughly 85, so she wanted to spend her money and enjoy herself while she could.