Robert Duvall Is Right on Cue

Robert Duvall Is Right on Cue 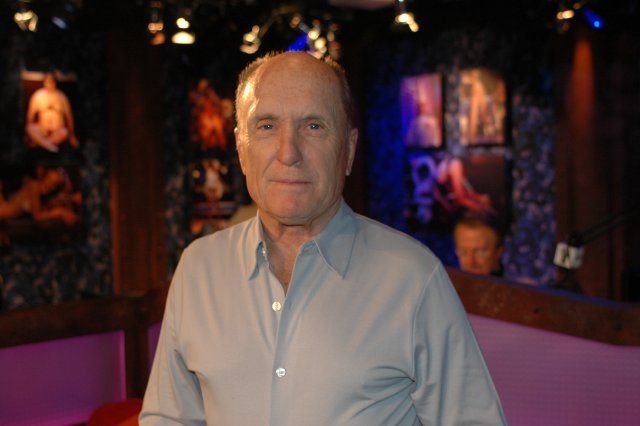 When Robert Duvall came into the studio, Artie welcomed him with a scene from “The Godfather.” Although Artie’s performance got a round of applause, Robert insisted “the tape” wasn’t of him and Howard explained to him it wasn’t a tape at all, but Artie doing an impression of him. Howard then asked Robert if he was still ultra-conservative, which Robert said he was and that he recently spent time with President Bush. Robert reported that the president didn’t come off as “an intellectual,” but was, however, able to remember the name of everyone in the room. However, Robin replied that was hardly a compliment to the president because, to her, knowing people’s names is all part of his job. Given his conservative views, Howard asked Robert if he felt George should be able to marry Brad, his partner of 20 years. As George began making his case for gay marriage, though, all Robert said was, “Who is this guy?”

Robert said he hasn’t watched many episodes of “The Sopranos,” but, from what he’s seen, he thinks it’s “authentic.” Howard then mentioned Robert used to be roommates with Dustin Hoffman and he heard that Dustin was good with women. Robert replied that was true, but refused to give any names of Dustin’s conquests. Because Robert is starring in a new Western movie, “Broken Trail,” Howard wondered what his opinion was of “Brokeback Mountain.” After Robert said he has never seen “Brokeback Mountain,” Howard asked if he’d ever kiss a man onscreen if a part of his called for it, but he said he wouldn’t. When Howard pointed out he thought Robert and John Wayne would’ve made for a nice pairing onscreen, George pointed out that he starred in “Green Berets” with John. George went on to say he thought John was “a great actor” who was “the same guy off screen as he was on.”

A caller asked Robert if he was feuding with Jack Nicholson, but he replied he didn’t know why the caller asked the question. Fred then said he knew why the caller brought up the point and it was because Jack won an Academy Award for his role in “As Good as it Gets” while Robert was favored to win that year for his part in “The Apostle.” After hearing Fred’s explanation, Robert said he and Jack have no issues with each other, although he admitted there have been times – including when he didn’t win an Emmy for his portrayal of Gus McCrae in “Lonesome Dove” – that not winning an award has bothered him.

Robert explained that “Broken Trail” is a character-driven movie about cowboys and might even have a better cast than “Lonesome Dove.” Robert then talked about the handwritten letter Marlon Brando sent him to tell him how much he enjoyed “The Apostle” and that the letter is framed and is hanging in his Virginia home. Gary proceeded to come into the studio to announce that Robert had to leave because of other press he had to do for his movie. Before he left, though, Robert noted he didn’t want his time with Howard to end because he knew talking to him was going to be “the best” interview he ever did.