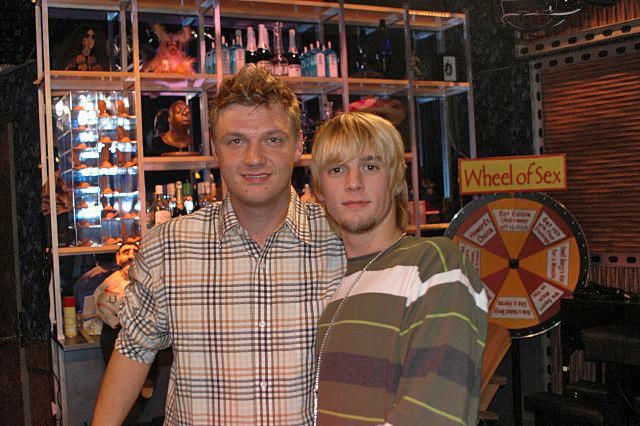 Nick and Aaron Carter were Howard’s next guests, and Nick said they lived together, and, along with their three sisters, have filmed a reality show, “The House of Carters,” for E!. Nick noted he got into the Backstreet Boys because his mom was insistent that he become famous, and admitted he had mixed feelings about her actions. Nick went on to say he had money, but not as much as he thought he should’ve earned. Although Nick said he wasn’t going to “cry over spilled milk” in regard to his finances, Howard told him he had the right to be upset over it, noting how hard it was to make it in show business in the first place. Aaron added he had the same problem, mentioning there was some money missing from his bank account as well, but Howard replied he’d get to him in a minute.

Nick acknowledged he had sex with Paris Hilton, and called getting her “a conquest.” Nick also recalled how Howard was able to “get under Paris’ skin,” explaining that, while they were together, she was very nervous the morning he interviewed Rick Solomon, her former boyfriend who was her “co-star” in their infamous sex tape. Nick then said Paris accused him of physical violence toward her, but he denied the allegation, and mentioned she never pressed charges against him for the supposed incident.

Nick next claimed he lost his virginity when he was 15, and that his partner was the teacher, Debbie LaFave, who made the news earlier this month for having sex with one of her students…although she was his classmate and not his teacher at the time. Nick then got back to Paris, who he met at a club in Los Angeles. Nick added he and Paris made out in his car that night, but that he was able to resist having sex with her for two weeks as a way to seem more desirable to her. However, Nick said he gave in to Paris when they went to the Bahamas, and that he was hurt when she broke up with him.Nick also claimed he had sex with Willa Ford, and ranked Debbie LaFave as his best sexual experience, while explaining the other good partners he had were women who weren’t famous. Nick then said he had the chance to be with both Mandy Moore and Jessica Simpson as well, but that he turned them down because he was dating Willa at the time.

Howard started his discussion with Aaron asking him why Lindsay Lohan and Hilary Duff were fighting over him last year. Aaron replied that he didn’t have sex with Lindsay, because he was a little “scared” of her past, and that Hilary was his “true love.” Nick then noted he thought Lindsay was “more down to earth” than other Hollywood girls, and Howard agreed, and pointed to her troubled relationship with her father as one of the reasons he felt she sometimes behaved wildly.

Aaron mentioned that, contrary to reports, he hasn’t divorced his mother, although he acknowledged he thought she stole money from him. In fact, Aaron said he visited his mom on Mother’s Day, but admitted it was “awkward” seeing her in a private setting, explaining she used to be his manager, and that their time together was therefore more business-like than personal. Nick then commented that he had a hard time speaking to his mom, because he felt she sometimes had ulterior motives when she contacted him.