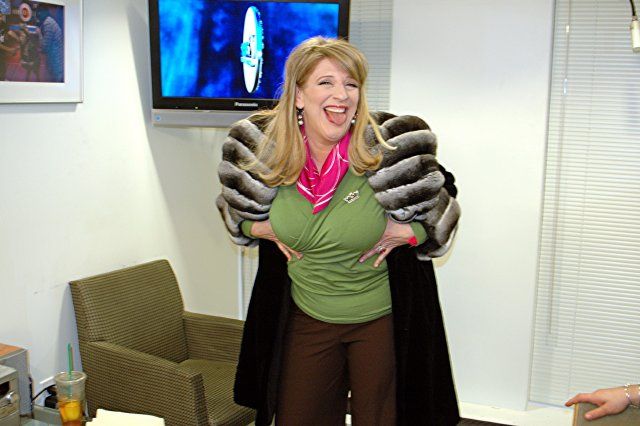 Lisa Lampanelli came into the studio, and Howard pointed out right away that she had a new look. Lisa responded by saying that she has recently lost 40 pounds, and, because of that, decided to get hair extensions and a fur coat as well. Lisa added she’d noticed the lighter she got “the lighter the skin color of her dates got,” also acknowledging she’d begun wearing tighter clothes since she dropped the pounds.

Lisa noted that, like Artie, she took part in the South Beach Comedy Festival this past weekend, and that the two of them were relegated to their hotel’s pool for “ugly people.” Lisa proceeded to say she was no longer “banging just the blacks,” and was instead “taking it slow” when it came to dating. After hearing that, Howard got back to the topic of the “ugly pool,” and recalled that when he stayed at the same hotel, he was asked to swim in the “ugly pool” while Beth was allowed to be in the pool for attractive people.

Howard pointed out he thought Lisa had nice breasts and a pretty face, so he wondered if she planned on losing more weight, which she said she did. When Howard then asked Lisa what her rear end looked like, she replied that it looked like she “sat on a gravel driveway while naked.” Lisa then mentioned she was now into “making out” instead of having sex, although she also admitted she was usually willing to “rub down” her dates over their pants. Lisa also commented she needed to start dating better men, noting she was most attracted to men without jobs, despite the fact that she was successful, grew up in Connecticut and attended Harvard.

Lisa then reported she was on “The Tonight Show” recently, and made her fellow guest, Michael Clarke Duncan, laugh so hard that he walked off the stage during her performance. Lisa proceeded to say people in the audience thought Michael, who is black, was upset with her because of the racial jokes she was telling, but added he gave her a big hug following her routine and that there were absolutely no hard feelings between them.