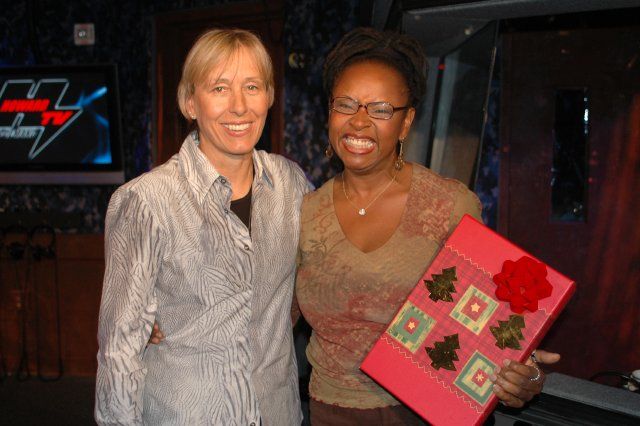 Martina Navratilova stopped by and told the crew that she almost wasn’t allowed upstairs; she forgot her I.D. and the security personnel didn’t recognize her. Howard told Martina that he was awed by the fact that she’d converted a married woman to a lesbian (they’ve now been dating for seven years), but Martina confessed that “we went out to lunch and that was that. It was a surprise to both of us.” Howard asked Martina if she’d ever been with a man, and Martina said yes, when she was 17 – and hinted at the possibility that she’s had straight sex since. Howard wondered what Martina, as the AARP’s health ambassador, would recommend for Artie, so she suggested an hour-long game of basketball once a day. Martina then shocked the gang by revealing that she had to pay alimony to her former partner.

Howard noted that Martina really had an affect on the women she dated, as another former lover of Martina’s shot at her after they broke up. Martina admitted that she was cheating on the shooter at the time and would rather not talk about it on the air. Robin said she once heard that Martina picked up women just by staring at them, but Martina claimed the story wasn’t true and her dating life was actually quite “boring.” After a barrage of questions, Howard got Martina to admit that her sex-act preferences weren’t set in stone and depended on the woman. A caller asked if Martina ever used steroids, so Martina explained that she would never cheat – she’d rather exercise and weight-train. Another caller asked if Martina was ever attracted to Chris Evert, and though Martina admitted that Chris was “cute,” she claimed she could never think about a close competitor sexually.