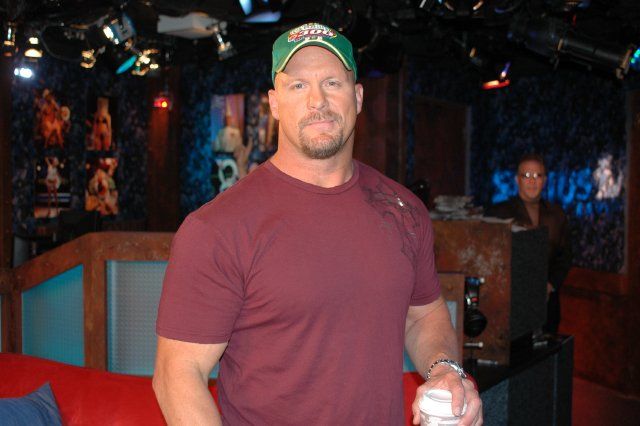 Stone Cold Steve Austin stopped in to talk about his new movie, “The Condemned.” After Howard said he’d seen an advanced copy of the movie and that he “loved it,” Steve added he thought fans of action pictures would enjoy it as well. Steve went on to say that, as much as he loved the character he played as a wrestler, he thought his movie role was closer to what he was really like. Howard then reminded Steve about the story he told about one of his ex-wives who once tried to stab him, but Steve responded that he couldn’t “talk about that.” Steve reported Vince McMahon financed “The Condemned” even though they’d had a falling out over what was happening to his wrestling character. Steve then noted he got his “stubbornness” from his mom before giving Vince credit for ending their feud. Steve next said Vince put up about $20 million for the movie, and that he was paid upfront and would also be earning “points” depending on how it did at the box office. Steve proceeded to insist Vince was an honest man whom he trusted completely when it came to getting his money.

Looking for Some Competition

Steve denied Howard’s claim that he “hated” Hulk Hogan, but said he wouldn’t wrestle him because their “styles clashed.” When Robin noted she’d heard Vince wasn’t on good terms with Hulk because he was promoting a different wrestling league than the WWE, Steve mentioned he wished another league would give the WWE competition because he thought it’d be good for the WWE, but added he didn’t think that would happen.

The Rock, the Midget, and the Gay Wrestler

Steve commented he was now dating a woman who was “a little younger” than him, and said he had pre-nups with his former wives, so he didn’t lose much money in his divorces. Steve then reported he met his current girlfriend at a gym, which led Robin to note she felt he wasn’t meeting women in the right places.

Howard went on to ask Steve what he thought about the Rock’s career, but he responded that he wasn’t friends with him, and that the only people from wrestling whom he kept in touch with were Kevin Nash and Diamond Dallas Page.

Eric the Midget called back in to ask Steve if he planned on working in the WWE anymore, but he acknowledged he didn’t see himself “stepping back into the ring,” although he wouldn’t rule out potentially being involved in an upcoming Wrestlemania. Howard then took some more calls for Steve, and also asked him what he thought about the openly gay wrestler, Chris Kanyon. Steve replied that, while he didn’t have a problem with Chris’ announcement, he added he wouldn’t wrestle him.

Before he left the studio, Steve said he was confident “The Condemned” would do well, although he wouldn’t predict how much it would make in its opening weekend.