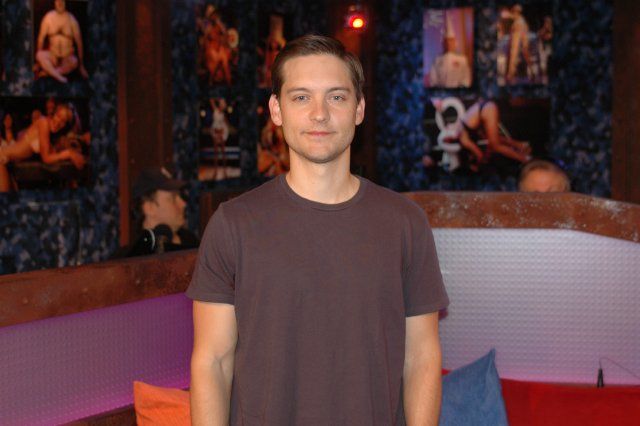 Tobey Maguire came into the studio to talk about “Spider-Man 3” among other topics. After Howard recommended that Tobey legally change his name to Spider-Man, Artie wondered if he was “the only intellectual” in the room, adding he thought Tobey should change his name to “The Cider House Rules.”

Howard then mentioned an article that appeared in today’s New York Post that gossip columnists used to want to portray Tobey as gay because he was hanging out with Leonardo DiCaprio.

This led Tobey to remember his mother once talked to someone at the Globe – someone who had told Tobey’s mom that she was actually working for a gay-rights publication – about how her son sometimes slept in the same bed as Leonardo, and that he had to ask her to never talk to reporters again.

Howard said Tobey and his girlfriend, Jennifer, who is the daughter of Hollywood mogul, Ron Meyer, had a baby together, but that they had yet to get married so he asked Tobey why. Tobey responded that he’d been busy the past year, and that he and Jennifer planned on tying the knot sometime soon. Howard then commented Jennifer had a baby shower last year, and that Jennifer Aniston, Courtney Cox, Jennifer Garner, Demi Moore and Kate Hudson all attended the event.

Howard brought up that Tobey doesn’t drink or do drugs, and he replied he started drinking at the age of 14 and he quit when he was 19. Tobey went on to say the first acting job he had was in a Rodney Dangerfield special, and that Rodney approached his mother on the set and said, “How about we get together and do some huggin’.” However, Tobey added his mother turned down Rodney’s advances

From Lovers to Co-Stars

Howard reported Tobey made $12 million for the first “Spider-Man” and $17 million for the second installment of the series, but Tobey wouldn’t get into how much money he made for the newest movie.

Tobey went on to say he “loved working with the people” from the “Spider-Man” franchise, and wouldn’t rule out being in a fourth film if the same people involved in the first three decided to make it.

Howard proceeded to say he and his “Spider-Man” co-star, Kirsten Dustin, started dating during the first “Spider-Man,” and he wondered if it was now awkward working with her since they’d split up. Although Tobey laughed off Howard’s question and refused to answer it, he added he liked working with Kirsten and that they were friends.

When Howard next asked Tobey if he and Leonardo “ever did the same woman,” Tobey again laughed and asked, “Do you really think I’m going to cave with any of this stuff?”

Despite this, Tobey did admit he once skinny-dipped with Liv Tyler, and that he threw up during the swim because he’d been drinking.