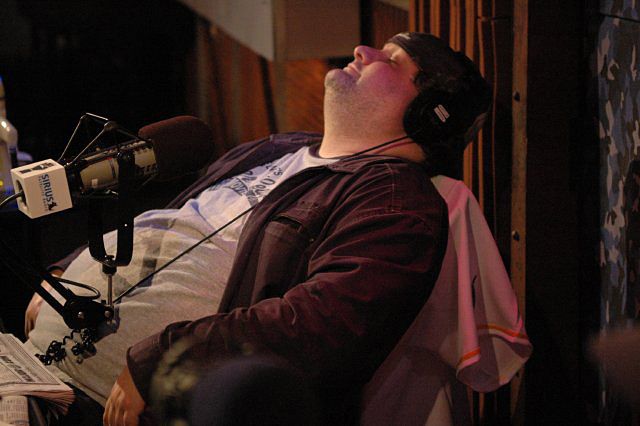 While Howard was setting up a clip from yesterday’s meltdown on “The View” between Rosie and Elisabeth, a caller asked if he had told Artie about Jennifer before she came into the studio yesterday.

Howard said he hadn’t but was convinced by her letter that it would be a great segment and wanted Artie to read the letter to prove it.

However, when the caller speculated that Artie would end up leaving the show…Artie agreed with him. When Howard asked if that was true, Artie said yes, he was thinking about leaving in January. He went on to explain that he had gone to the doctor recently and decided he was burnt out based on what the doctor told him so he thought taking a 6 month break from everything might be a good idea.

He said he even contemplated going to rehab, just to get his life in order, not because he was currently abusing anything. He added that he was also thinking of “going out to Europe,” just to chill out. Artie said the schedule was really wearing on him and he wanted to be able to sleep in sometimes, and to go out on a week night and to watch the whole Super Bowl for a change.

It Worked for Tony Soprano

Howard thought Artie was overreacting, saying that he hadn’t even tried therapy, which has been very helpful for him. Artie said it was the schedule that really killed him and that, because he had to do stand-up to help him maintain the lifestyle he wanted, he was just burnt out. Artie did admit that he really hadn’t given the shrink a fair chance, so he would look into that.

Howard explained how difficult it was for him to drag himself to his therapist all the time, but he knew that he always felt better when left his office, so he makes the effort. He went on to explain that therapy has made him feel much more connected with the people in his life, and thought Artie could benefit from seeing a therapist in a serious way. Howard was afraid that running away from his work wouldn’t get rid of the angst in his head, recalling the episode on “The Larry Sanders Show” when Larry runs away to a farm in Montana, and only lasted 3 weeks.

Howard pointed out that the creative freedom afforded by being at Sirius was a lot to give up, and Artie acknowledged that that creative thread was the only thing that kept him from “the madness.”

Artie explained that the last time he felt this way, he was working on “The Norm Show” and was the healthiest he’s ever been; making $35,000 a week, driving a convertible, getting up at 11AM, listening to Howard’s show, working for a few hours, going out and scoring with chicks way out of his league. Meanwhile, Robin said she was so upset by this that she was now thinking about quitting too.