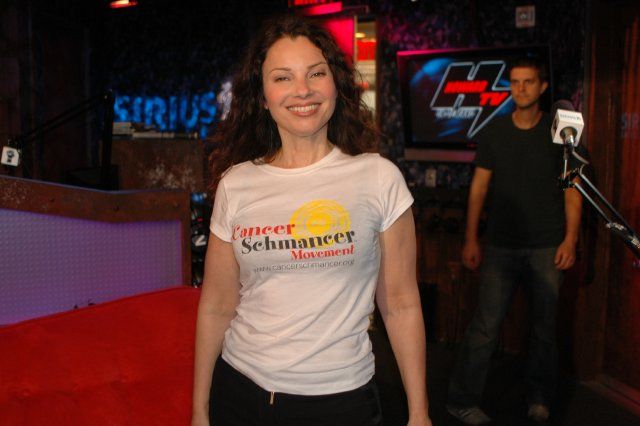 Fran Drescher came in to promote her “Cancer Shmancer movement”, and Howard remarked that he saw her at his gym frequently.

Howard asked if Fran understood government, and Fran replied she was a lobbyist and advocate. Fran reported that she had just gotten a bill passed unanimously that demanded support for early cancer diagnosis.

Howard asked Fran what the three branches of government were, but Fran blanked. Howard thought there were a few things in Fran’s past that could prevent her from being elected to public office; for instance, her “f’ buddy.”

Fran claimed she no longer has the “f’ buddy,” and was now looking for someone who, like Howard, was age appropriate and wealthy.

Fran said she last had sex a few weeks ago with a successful showbiz type. Howard remarked that Fran claims she had the best sex of her life with an Argentinean man. Fran acknowledged this was true, because the guy was really into her.

Fran remarked that she might consider a run for Congress, so Howard asked Fran how she thought people would vote for her when she has admitted to smoking pot. Fran replied that if people could vote for the current president, she didn’t think pot use would be a problem. Fran reported that she had uterine cancer, and treatment involved the removal of her ovaries and uterus. Howard asked where Fran’s eggs are, and Fran said they were at Cedar-Sinai Hospital in case she wanted to have a biological baby later (via a surrogate mother).

A caller said he was skeptical at Fran’s potential as a Congresswoman. Fran replied that she was a cancer survivor, victim of violent crime, and had successfully pushed legislation through Congress. The caller was surprised, and promptly changed his tune. Fran also explained the cancer causing effects of HPV (Human Papilloma Virus or genital warts) and advocated the practice of safe sex. Howard thanked Fran and wished her luck with her “movement” and man hunt.