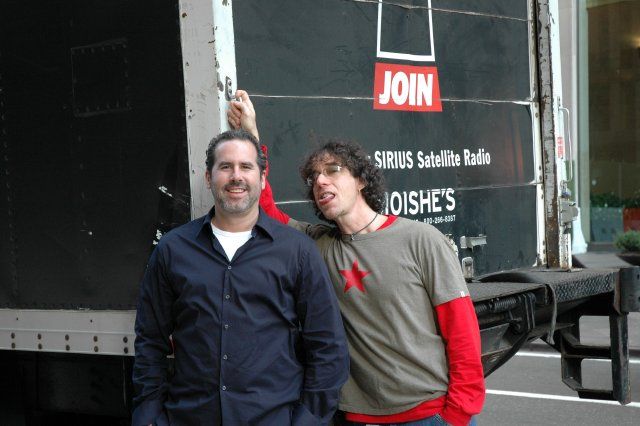 Howard reported that he invited Artie out to the Hamptons for a small Tom Petty concert, but the night before, Howard went to Leon Black’s house and Tom put on an (even more) private concert in the living room. Howard feared that he wouldn’t be fun enough for Artie, so he invited Ralph out as well. When Howard woke up from a nap on the day they were scheduled to arrive, he found Artie and Ralph in the hot tub. Artie then admitted that he was wearing swim trunks Ralph had fashioned out of an old pair of sweatpants.

Artie revealed that he paid for a helicopter ride out to the Hamptons and invited Gary to fly out with him, but when Ralph weaseled his way onto the helicopter as well, they had to switch to an older, but bigger helicopter that could handle the increased weight. The change in helicopter also confused the car service in the Hamptons, which made them late to Howard’s barbeque and stressed Artie out. Later – just two minutes before the group was to leave for the Tom Petty concert – Ralph began making flight reservations for a trip to LA. Ralph obliged Howard’s requests that he hang up but began complaining that he had to pee 5 minutes into the limo ride. When they arrived at the concert, Ralph ran out and peed in the bushes – in front of security, paparazzi, and all the guests. Howard said he was so upset, he told Ralph to stay away and not smoke pot near him.

Artie noted that Ralph got very drunk very fast and began dancing obnoxiously. Gary came in to say that Ralph was even nearly punched out by a fellow concert-goer who didn’t appreciate Ralph’s comments about his wife. Howard left early, so Ralph, Artie, Jon Hein, and Gary stayed with Ross Zapin at the concert for a “guy’s night.” The guys all went to Sarah’s (a Hamptons nightclub) and Ralph began “dirty dancing” with a much “older” woman. Gary told the crew that he tried to convince Ralph to leave, and Jon Hein and Artie had each tried the same thing. Artie said he even handed Ralph $300 for a ride home and shouted Howard’s address across the crowded dance floor for Ralph to enter into his new iPhone. Howard woke up the next morning, noticed that Ralph hadn’t used his room, and then discovered that Ralph had left five panicked voice messages.

Howard played the voice messages from Ralph, in which Ralph claimed he was “ditched” by Artie and the guys and ended up taking a bus back to the city. Ralph demanded that Howard “throw all his stuff in a bag” with some cookies and called the guys “cocksuckers.” After Howard first listened to the messages, he called a meeting at his house to see what went down, and Artie got pissed because they had made every effort to make sure Ralph was fine.

At the meeting, the guys conference-called Ralph and asked him what was going on. Ralph denied doing any drugs other than pot, but admitted that he found a guy to drive him around in search of Howard’s house. Ralph’s phone died, so he also was calling Howard’s private number on the guy’s phone. After the call, Howard and Beth packed up Ralph’s stuff (even the cookies), and gave the bag to Artie to deliver.