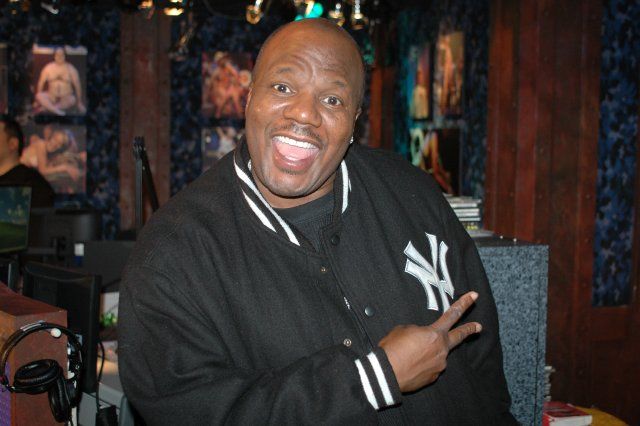 Earthquake stopped by to promote his upcoming gig at the House of Blues in Atlantic City and began asking Robin why she wasn’t dating a black comedian. Robin laughed off the question and asked what Earthquake thought about Barack Obama. Earthquake said he loved Obama but thought he was going to have a hard time winning if Hillary kept crying. Howard wondered if Earthquake’s ex-wife cried when they split, and Earthquake said no; she just went after his money. Earthquake told the crew about the dangers of being a single black man; having to watch your possessions when you take a girl home from the club, the “application” process white women demand before dating him, and not being able to kill his wife like white dudes do. Howard asked how Earthquake dealt with his ex-wife, so ‘Quake railed against her for using his son “like a hostage” and always trying to get more money out of him.

Still on the subject of his ex-wife, Earthquake added, “I understand if she wanted to break up with me for not being the man she thought I was, but I’ll be damned if I’m going to compensate her for it.” Howard wondered how the divorce proceedings went, so Earthquake laughed at his ex’s divorce court histrionics, noting that she claimed he loved transvestites and acted up such a storm, even he had to clap after her performance/testimony. Earthquake told the crew that he used to be a sergeant in the Air Force, and one time, he was once in such a rush to go to a 2 Live Crew concert that he accidentally dropped a nuclear missile he was wheeling out to a plane. Earthquake’s co-workers all ran, but ‘Quake just sat down, had a cigarette, and waited for his supervisors to come over and test him for radiation. Howard and Artie had quite a laugh at the thought of someone telling the president that “Earthquake dropped The Bomb.”