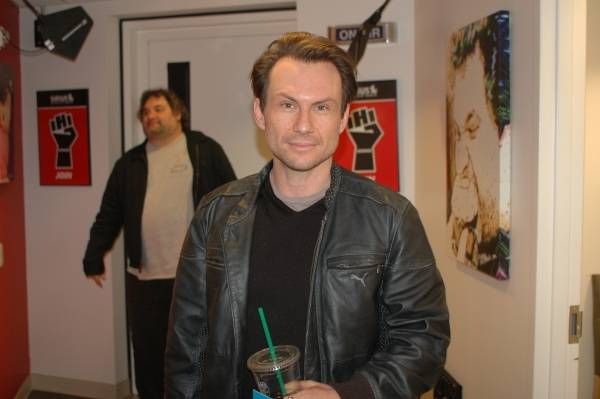 Christian Slater stopped by to promote his new TV show, “My Own Worst Enemy,” and remarked that he once “ran around” Vegas with HowardTV executive producer Doug Goodstein. Howard asked if was a bummer to go from film to TV, and Christian response was slow: “Yeah…no.” Howard noted that Christian’s currently dating the founder of Jimmy Choo shoes. Christian explained how he met her on a blind date, which he felt was a good sign, as he met his now ex-wife in rehab. Christian added that he was so upset over his marriage’s dissolution, he went to London, got loaded and ended up fighting with a cop. Howard pressed for more details, but Christian didn’t remember much – just that he was roof-hopping and ended up getting tasered: “I tried to grab the cop’s gun out of the holster.” Christian said he’s since sobered up (again) and has been alcohol and drug-free for three years. Howard noted that Christian’s dad was also known for being a little nutty, and Christian agreed: “He’s changed his name eight times…he’s got a weird theory about syllables.”

Christian said that before he started seriously dating his current girlfriend, “We had to go through a whole procedure and meet with lawyers. There were papers signed.” Howard laughed and nervously moved on before confirming whether Christian was being sarcastic. A caller asked if Christian had ever had his salad tossed and Christian was honest: “Of course! Is that bad?” Artie told him it was ok: “It’s just an extra fifty bucks.” Another caller asked Christian about sex with Winona Ryder. Christian rolled with it: “You know, it’s the best stuff. It’s great.” However, Christian would not say whether Winona had tossed his salad: “Uh…”