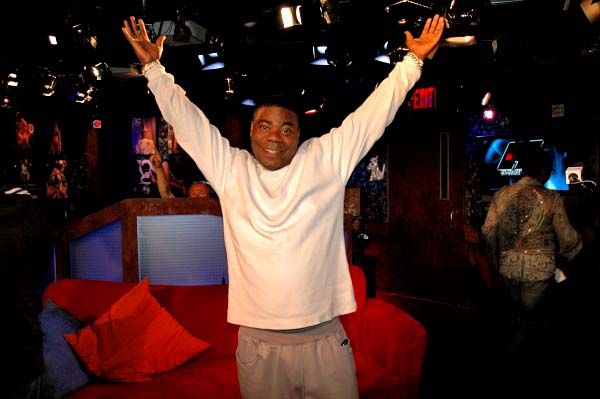 Tracy Morgan came in to promote the new season of “30 Rock” and bragged that he was off probation: “No ankle bracelet! There’s no cops in here, right?” Howard asked how Tracy’s love life was going, so Tracy confessed that he recently broke up with his girlfriend: “I don’t need to be with anybody who’s got a guilty conscience.”

Howard then went through Tracy’s alleged romantic resume, and Tracy riffed on each one but once Robin Quivers’s name came up, Tracy turned and told her, “You right there. If you ever gave me some, you’d get pregnant. I’m not pulling out.”

Tracy added that he was enjoying his bachelorhood. Tracy also told the crew about his way of testing women for STDs – he sticks his finger in his ear and then in a woman’s vagina: “If she jumps, that means she got the clap. In the ghetto, they teach that in public school.”

A caller asked if a recent tabloid report about Tracy’s behavior at Prince’s house was true, and Tracy said it was: “I woke up on the couch and he and his wife were at the door telling me, ‘You got to go’…I grabbed him by the shoulders and told him, ‘My father loved “When Doves Cry”‘…then I smoked a blunt in his driveway while the sun came up.” Tracy then laughed that he met his girlfriend by telling her “Hey baby, I want to get you pregnant.”