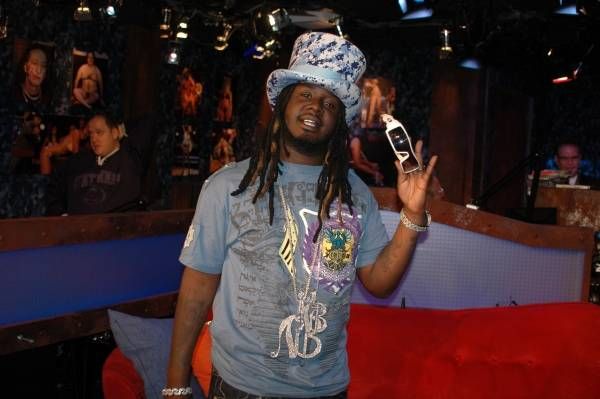 T-Pain stopped by to promote his latest record, “Thr33 Ringz,” and told the crew he’d come a long way: “I mean, we weren’t sleeping in cars and stuff…we was hood rich.” Howard asked how T-Pain’s trademark “vocoder’d” sound has influenced modern pop music, so T-Pain said a lot of people (Lil’ Wayne, Kanye West) were copying his talkbox-assisted R&B these days: “Roger Troutman made it famous…now everybody’s doing it.”

Howard asked T-Pain why he turned down a big-money offer from Interscope, so T explained that Interscope just viewed him as a one-hit (his first, “I’m Sprung”) wonder: “It wasn’t the right situation…I signed with Akon and Akon took me to Jive.” T said the Jive deal was a smarter decision but worth a lot less than the Interscope offer: “I’m all about long-term, man.” T-Pain said he had to leave home after turning down the Interscope deal, as his father was irate over the decision. Later, after T-Pain’s career took off at Jive, his old man had the balls to call up and ask for $250,000 – claiming that he’d leave his son alone forever in exchange for that amount. Howard empathized with the story: “My heart breaks for you when I hear that.” T-Pain laughed that he last heard from his father two weeks ago when he called up with a oil deal: “He told me he was about to be the richest man I know.”

T-Pain told the crew that he married his wife at the age of 18, and the secret to their happy marriage was threesomes: “[My wife’s] been throwing me these stripper parties at my house…I got a club at my house. She actually bought me the [striper] pole…there’s a stage under the pole and it lights up and the pole lights up too.” T-Pain said, “The last party was awesome. There were, like, 35 girls…the rule is, we gotta ask each other. I can’t just go stick my dick in another girl.”