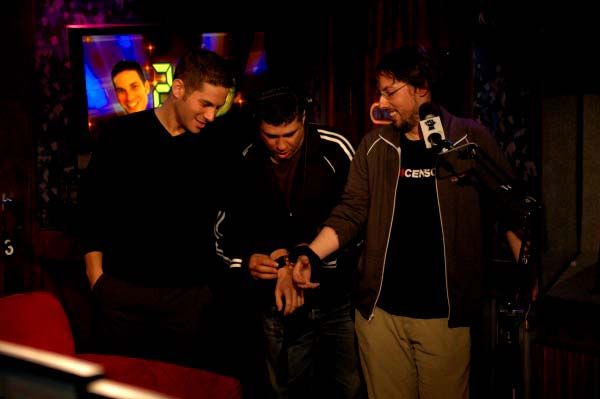 Howard noted that JD and Jared Fox would be handcuffed together at 7am. JD came in to say it would be difficult to be handcuffed to anyone – not just Jared – for 24 hours, especially with a camera on them the whole time.

JD promised to last at least until the afternoon, and Jared came in to say JD was welcome to stay at his house. Jared’s only stipulation was that JD accompany him to the gym: “I’ve got things to do today and one of them is the gym.” Jared noted that he’d also have to shower after the gym, leading JD to say that while he would stand on an adjacent treadmill while Jared ran, he was apprehensive about the post-workout shower situation.

Jared added a few other plans to the pair’s agenda, including a 2pm dump and an investment banker party at an “exclusive” nightclub. Dominic Barbara then called in to double the $1,000 prize for the guy who gets his competitor to quit. Later, at the stroke of 7:02am, JD and Jared were handcuffed together…with fur-lined handcuffs. Jared said it was a little awkward, which surprised JD, who sarcastically asked: “A little? What – have you ever been handcuffed to someone before?” Jared deadpanned: “Yes.”