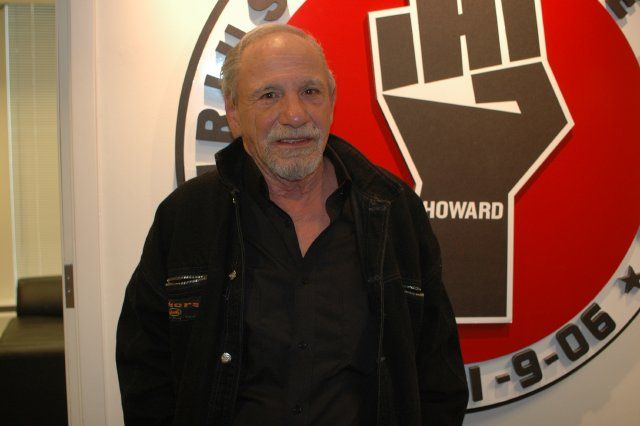 Henry Hill stopped by with his fiancée, Lisa, to promote his sauce and paintings. Lisa said Henry needed a couple beers in the morning to be “ok,” but she only allows him to drink once a week. When she lets him drink, he frequently does so to excess and ends up in jail. Henry then begged for a drink, so Howard decided Henry had to earn it: “First tell me what it’s like to kill a guy.” Henry said he once killed a guy by sticking an ice-pick into the back of his head; “[The ice-pick] goes in easy, it comes out easy.” Robin asked Lisa if she has sex with Henry, but she “denied” it. Henry said he loved to receive oral sex, so Lisa complained; “Oh, now I’m gonna be the blowjob queen of California?” Henry coughed laboriously in response, leading Artie to ask him about his health. Howard asked about Henry’s highest-earning year in the mob, so Henry cited 1967, when he earned $150,000 from several “jobs,” including the Air France heist.

Henry told the crew he’d written a script about fixing the NCAA Final Four tournament in 1979. Howard asked how Henry fixed the tournament, so Henry explained that he paid the “leading scorer and the center” to shave points, eventually earning him $450,000. Henry added it was easy, since a lot of college players were nervous that they’d never see a professional NBA salary and more susceptible to coercion.

Howard asked if a paid-off player ever had second thoughts and didn’t do what they were paid to, and Henry said yes, noting that he fixed the problem by threatening to break the player’s arms. Artie asked Henry how he should handle the bookie who owes him three quarters of his Super Bowl winning, so Henry answered, “with a baseball bat.” Artie then offered Henry a portion of anything he collects to do the job. Henry laughed that he’d do it, but then showed the crew the hernia that might make the job difficult for him.