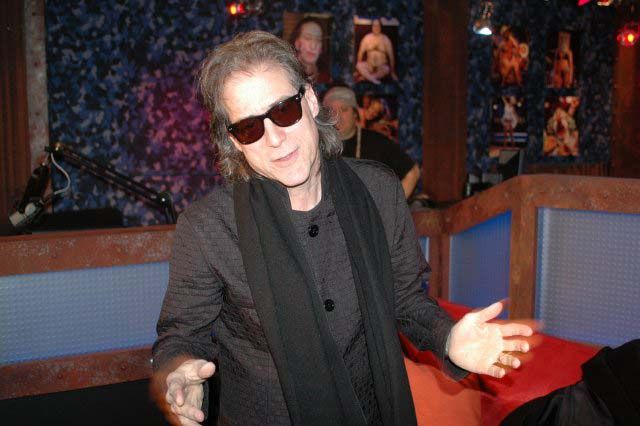 Richard Lewis stopped by to promote his upcoming comedy gigs and Howard immediately brought up his former champagne “addiction.” Richard corrected him saying that it was crystal meth, not champagne, that he was addicted to and wondered why Howard always says the same thing every time he comes in.

Richard began yelling at Artie to admit he was a drug addict (Artie readily obliged), tossing off his microphone in the process: “You’re in denial, Artie. It’s a deathwish, man.” Artie admitted he had a problem but thought “deathwish” was going a bit far: “I know it’s hard to believe, but I don’t wanna die.” Richard, as a fellow addict, didn’t believe it though.

Howard asked if Richard’s problems were rooted in his (infamously negative) relationship with his mother, but Richard disputed it, saying, “She’s neurotic…[but] now she’s dead.” Howard then noticed Richard’s over-groomed eyebrows, leading Richard to confess: “How can you see through the Ray-Bans? I did a little tweezing.” Richard tried to deflect by mentioning his co-headliner Richard Belzer’s band, The Belzonics.

Richard said he also used to be addicted to enemas: “I have some memories from back in the day of when I was loaded…to have them stick it in my ass and squirt the water was a trip.” Howard asked Richard if he had any friends other than these memories, so Richard cited a painter named Carl who’d been his best friend for over 25 years. Richard added that he recently had a great experience on the Craig Ferguson show, as Craig interviews without the assistance of pre-interview notes.