Flavor Flav: The Only Radio Host to Broadcast from Jail?

Flavor Flav: The Only Radio Host to Broadcast from Jail? 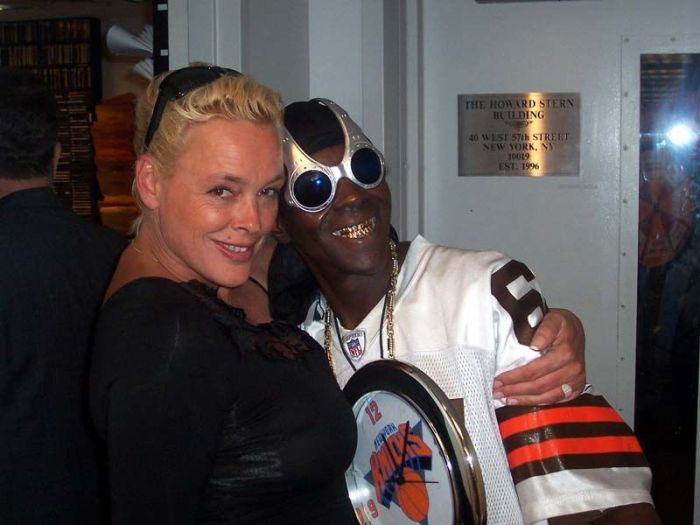 Flavor Flav stopped by to promote his “Nite Tales” DVD and asked Robin if she was running for president: “You’re behind the bulletproof ‘boof’!” Flavor added that he felt partly responsible for Obama’s presidency: “A Jewish president is next!”

Howard wondered if Flavor had a tough time dating Bridget Nielsen: “Did you go down on her?” Flavor laughed: “I was already down on her! She’s 6’2″ [and] I’m 5’8″!” Flavor told the crew that he lost his virginity at 6-years-old: “We were experimenting, man…natural instincts.” Flavor laughed that he hasn’t stopped since: “My three oldest…they live out on Long Island [with their mother]…my middle three [with their mother]…they moved up to Albany…my last one, his name is Karma…he lives with me [and his mother] in Las Vegas.” Flavor said planned to keep going, as he wanted three more children.

Howard asked if Flavor if he still talked with former rap partner, Chuck D, and Flavor claimed he did: “There were times when he was trying to get up on my [VH1] show.” Howard also wondered if Flavor would consider a return to radio. Flavor said he might – and noted that he used to work with Lisa G at Hot97: “Lisa’s always been single, man…honestly, I think Lisa’s scared. I think she’s scared of love from a man.”

Flavor noted that he was the only radio host to ever broadcast from jail, adding that his longest sentence was for two-and-a-half years: “I know it was wrong, what I did. But back in the day? I was the man!…The gang I was in, some of the stuff I had to do.”

Flavor told the crew that he faced some tough guys in prison: “They thought they’d make a name for themselves and beat up Flavor Flav…This was in the sixth building. The sixth building of Riker’s Island.”

Richard Tears Up During Metallica’s ‘One’