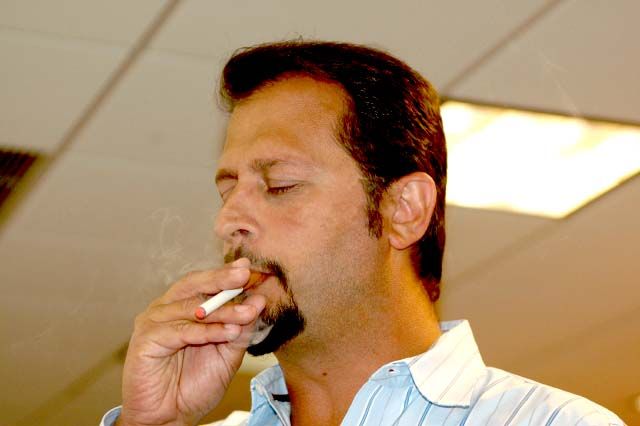 Howard went over reports of the staff’s behavior at the bat mitzvah Jon Hein threw for his daughter.

Several staffers reported that Sal had smoked his ‘electronic cigarette’ the entire time – Gary laughed: “You’re basically inhaling plastic instead of nicotine. The drops that he puts in them have the skull and crossbones on them.”

While Tim Carbo-Loads on the Way Out

Gary observed one staffer enjoying the stations more than anyone else: “Tim [Sabean] hit all of them. He had powdered sugar all over himself.”

Jon acknowledged that the Zeppole and fried Oreo station may have been a little over the top, but: “We wanted to surprise people a little bit. Tim was very, very excited.”

Tim came in to confess: “I went off the reservation a little bit…cookies are my weakness.”

Dancing: Post-Meal and Not at All

Jason admitted that he also overate at the party – and then danced for a few minutes: “When it was all over, it was like someone shot me in the stomach.”

Sal said he was having so much fun taking pictures of Gary eating that he forgot his wife. Gary laughed that even the DJ’s exhortations couldn’t move the Governales: “He goes, ‘All the couples in love get up and dance!’ And you see Sal and his wife just sit there and watch.”