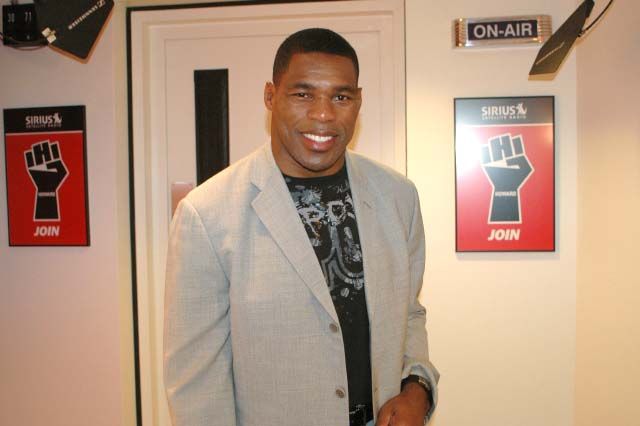 Herschel Walker stopped by to talk about his new ‘Strikeforce’ MMA career, testing the limits of his 47-year-old frame: “I’m pretending to be young. I’m really older.”

Howard asked why Herschel was interested in fighting and not football, so Herschel told the crew he’d made plenty of money in football – and investments – and now just wanted to have fun for charity. Herschel said he was so hungry for competition after his USFL and NFL careers, he once found himself playing Russian Roulette – solo: “I just loved to compete. I thought that was the ultimate.”

Herschel said he spun the chamber six times over. Robin was shocked by the idea of such a solitary ‘competition’: “You don’t have an audience for that one!”

Asked how much he’d made playing football, Herschel estimated the figure at around $30 million – 3 or 4 million of which he’d invested in a poultry company that’s now worth about $200 million: “It was a family business but I had to fire my family.”

Howard asked how you go about firing your own brother, so Herschel laughed: “You just tell him, ‘You gotta leave’…you pay him to go away from ya.”