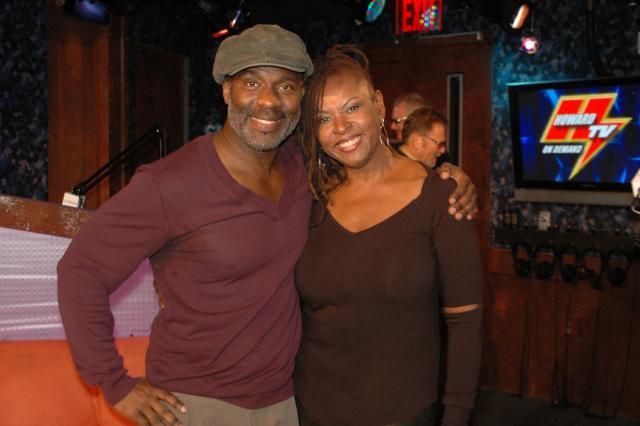 BeBe Winans stopped by to promote his new Sirius XM show and asked Howard why he had to come on as Robin’s mystery match: “I said, ‘I’m at that place where I’m looking to find someone and get married again.’ Did I tell you to find someone?”

Howard said BeBe was right: “No. But a thought came to my mind…Robin, be honest. You feel potential, don’t you?”

Howard insisted things would work: “Gary, bring in the Justice of the Peace.”

Howard then asked BeBe how he became a gospel singer, so BeBe explained: “I’m not religious at all, but I believe in God and I have a relationship [with Him].”

His success has caught the attention of several black luminaries, including Will Smith and Oprah: “Oprah is like a big sister to me…we are very close.”

Robin though this might be a reason things wouldn’t work out between them–she’ll never win Oprah’s approval: “You’ll have to give up Oprah.” BeBe had a reason of his own: “I’m very allergic to cats.”

Could Robin be Hiding Something?

After BeBe left, Robin accused Howard of using the ‘mystery match’ excuse to ensure BeBe’s appearance was interesting: “It was all calculated to make him a better guest on this show…it was all about entertaining.”

Howard insisted he wasn’t in the wrong: “I still had good intentions.”

Robin shot back: “They were secondary to good entertainment.”

Robin later confessed that she had a conflict with any matchmaking: “I am hiding something.”

Howard crowed: “Believe me, I know.”