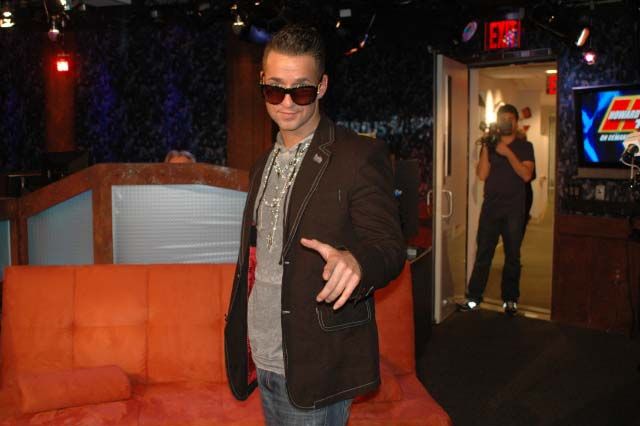 Frank ‘The Confrontation’ Sorrentino called in to explain the media campaign he has been waging against his son, “Jersey Shore” star Mike ‘The Situation’ Sorrentino: “It has nothing to do with money, OK? Basically Michael has been living with me for a long time and I’ve been taking care of him of a long long time.”

Frank said he was a diabetic and just wanted Mike to return the favor. Howard stopped Frank and asked what he meant to accomplish: “It’s clear that your son doesn’t like you.”

Frank hoped Mike would come to his senses: “Maybe he’ll sit down one day and close his eyes…”

Howard cut him off: “Really it’s not his obligation to care.”

Frank then back-pedaled, denying that he was writing a tell-all book and recanting his entire online-video campaign: “I’ll admit I was dead wrong for doing that.”

Howard said he’d planned to take Frank to task, but was pleased to hear him reneg: “I’m impressed. That was a big step for you.”

Frank puffed up: “It was the right step. I was wrong. And I admit I was wrong.” However, he changed tunes later, saying he’d only asked his son for a small amount of money, the equivalent of “about two bottles of Cristal champagne that he throws around at some dirty broad at night.” Robin shook her head: “What he does with his money is none of our business.” Frank quickly doubled back: “You’re absolutely right. And I apologize for saying that.”

Asked why he was giving interviews, Frank claimed the show had initiated contact :”You called me.” Gary, on the other hand, denied it: “You have a publicist of some sort who goes around contacting shows.” Frank said this was news to him: “He shouldn’t do that, that guy.” Will then came in to laugh: “He’s a completely different guy than [the one] I talked to yesterday. Yesterday he was like, ‘F’ Mike. That guy’s an asshole.'” Frank refused to back down: “You’re full of shit…I said I was wrong and that’s exactly I what I said.”