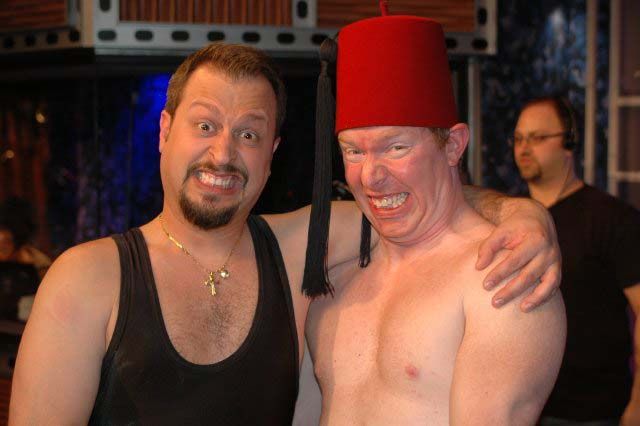 Sparked by further discussion of the bizarre behavior at Richard’s wedding, Howard remembered some of the crazy ideas Sal & Richard have pitched during past creative meetings: a contest to see who could hold a sparkler in their ass the longest, a competition in which each man was hung upside down and attempted to fill a cup–held in his mouth–with his own piss, a stunt where they’d dress up as women and have Jon Hein attempt to rape them (the winner would be the one who can hold Jon off the longest), and a staff-wide test of “load” weight.

Howard also recalled an idiotic pitch in which Richard wanted to see whose genitals could withstand a box of fire ants: “They’re like Laurel & Hardy.”

In honor of Richard’s nuptials, Howard promised to make Richard his Queen for a Day: “Let’s make his dream come true…we’re going to have a whole day. First I’m going to chloroform him, get him naked, let Jon Hein rape him and then I’m going to stick his dick in a box of fire ants.”