The Cost of ‘Back Office Radio’

Steve-O stopped by to promote his new TruTV series, ‘Killer Karaoke.’ Howard thought Steve finally seemed to fit in his sober skin: “He looks healthy. … The last time I saw him, he was sober, but newly sober. You know when a fat person loses weight, they don’t look quite right at first? It looks odd. But now you’re starting to grow into your sobriety and it looks normal.” Steve-O laughed: “Thanks… I guess.”

After Steve-O credited his signature voice to esophagitis, a condition brought on by frequent vomiting, Robin expressed surprise: “What were you doing vomiting all day?” Steve-O cracked (“I don’t know if you’ve seen any of my work…”) that his addictions were hard on his throat as well–at one point, he was using Special K, PCP, and aluminum cleaner: “It got pretty ugly. There’s no question.” 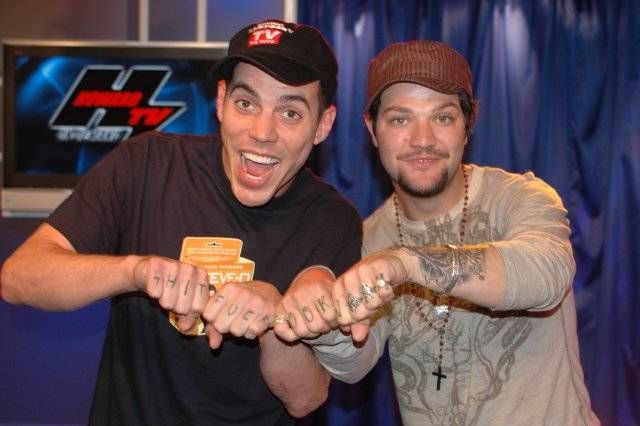 Steve-O denied rumors of a 4th ‘Jackass’ movie, but refused to rule it out (“It’s not that I don’t have it in me.”), remembering an unreleased stunt he’d performed with Johnny Knoxville’s catheter: “I actually used his catheter as a straw to drink his urine.” He crossed his fingers: “I think ‘Jackass’ has always been in a very good spirit. We’ve never hurt anybody but ourselves. … I think it’s very wholesome, really.” Asked about dating George Clooney’s ex, Elisabetta Canalis, Steve-O sang her praises: “She’s a wonderful girl. … [But] I can see how people find that interesting. I do. If I ran a celebrity gossip Website, I’d run that story too.” Steve-O doubted that he was better in bed (Steve is a self-professed premature ejaculator) than Clooney, as Elisabetta never said otherwise: “I never heard anything bad about him.”

Before he left, Steve-O told Howard about the time he spent in a mental ward with Mike Tyson–during Steve-O’s second visit to such a facility: “That one was more hospital-meets-country club. … I [kept] saying, ‘just hold your fist out and let me run into it with my face.’ But it just wasn’t the time.” Later, Mike made good at the Charlie Sheen roast: “My nose was, like, under my right eye. At least it felt that way.”

David Arquette is Headed to India