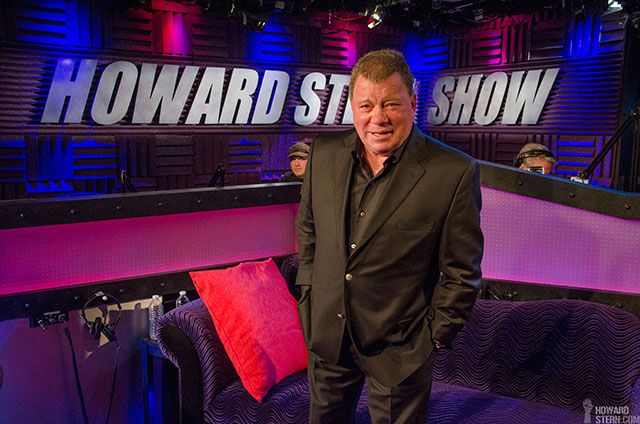 Here are some highlights from two legends in conversation:

* William tried to put to rest George Takei’s long-time grievance that he is paid a ridiculous fee ($300 – $500) for a photo and an autograph at Star Trek conventions. Shatner said he has nothing to do with that, he shows up for a fee – no matter how much more than George’s – and the promoters figure out how to charge the fans.

* William recently did a Reddit.com AMA and was horrified by the racist and insulting comments from people. He realized that with the new Internet, you don’t have to be held responsible for what you say.

* Howard said that Bill walked on the Star Trek set one day and saw Leonard Nimoy kissing Nichelle Nicholas in a scene. He decided that Captain Kirk should kiss her instead and had the scene rewritten, giving the world the first interracial kiss on TV. Bill says that the story of him having the story re-written for himself is untrue, it’s just something George invented.

* Bill’s pants fell down during a recent trip through an awesome TSA screening at the airport. Bill says he’d tired of travelling

* At a recent charity event, Bill performed Lucy in the Sky with Diamonds with Paul McCartney and Tom Hanks.

* Bill was paid for his amazing Priceline.com commercials in stock, which was about twenty-five cents at the time, and soared to $300 as the company grew. Unfortunately, Bill couldn’t sell due to how new it was and by the time he could sell it, it was down to ten cents. Now it’s up around $1,000, but, as Bill puts it, “what can you do?”

* Bill was shocked and disgusted that Howard’s c*ck dribbles after he pees.

* And of course, let’s end on a plug! View the video for Ponder the Mystery the single (written, directed and starring Mr. Shatner) or buy the entire album