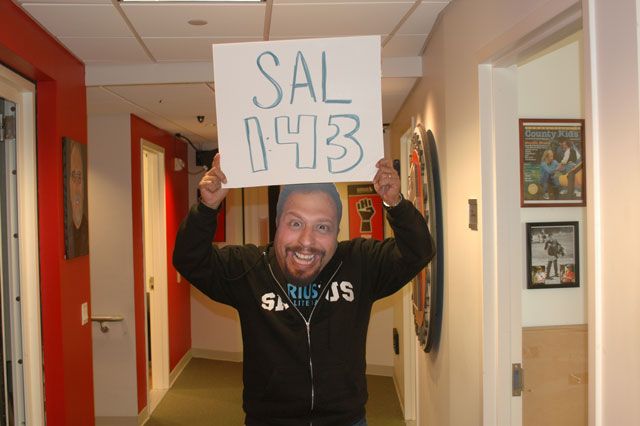 Although Howard has said many times that we aren’t giving away tickets to the yet, everyone on the staff has been besieged with requests. While Howard was brainstorming ideas for contests and segments that could be used to give the valuable passes to fans, writer Sal Governale came up with one of his own: Smear the ‘ricotta smegma’ that grows in Sal’s uncircumcised penis pouch under your nose for a pair of tickets.

If you remember, Sal’s writing partner Richard Christy had Sal’s ‘smegma’ smeared under his nose in order to sit in during Metallica’s performance in September and he actually vomited it was so vile.

Howard doubted – hoped – that no fan would endure that to attend his birthday party, but he’s probably wrong.

Sal is very excited about the birthday show and Howard heard talk that the reason he’s so excited is because he really wants to bring his new boyfriend, the Long Island Medium’s husband Larry Caputo.

Team Governuto have been inseparable for months. Sal has given Larry tours of the Howard Stern studio and even brought him to the Metallica concert at the Apollo.

Sal tried to claim he was joking when he demanded tickets for his best friend, but Howard saw through it.

Just as everybody was ragging on Sal for his man crush, things got weirder: In honor of Sal, Larry is getting a tattoo of the pager code heard ’round the world: 143.

Back in the early Sirius days, Sal revealed that his wife, Christine, had what he called an ’emotional friend.’ That basically meant she was cheating on Sal without have sexual intercourse.

This horrific discovery was made when Sal found that she had texted ‘143’ to him, which is classic beeper code for “I Love You.” Sal claimed it was nothing romantic, Larry is just a huge fan of the show and Sal consider ‘143’ to be his ‘Baba Booey.’

While everybody let this sink in, Richard Christy, perhaps spurned that Sal had found a new lover, suggested wiping his own fecal matter on Sal’s mustache in exchange for a ticket for Larry.

Sal said no, but we’ll see what shakes out.