Comedian shares stories in his return to the show 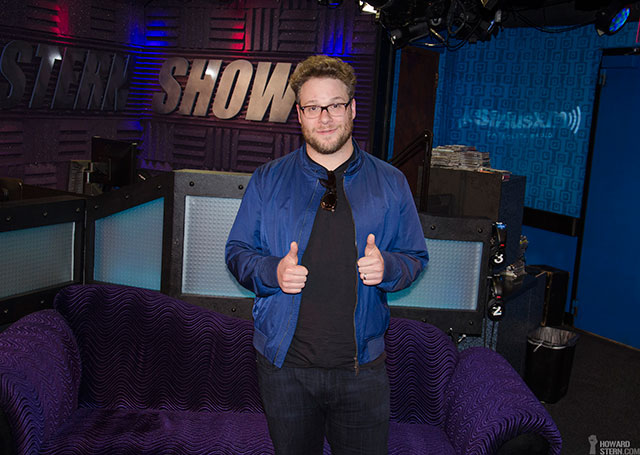 One of the biggest names in comedy, Seth Rogen stopped by the Stern Show this morning and told Howard about working with his “Neighbors” co-star Zac Efron. Seth found the teen heartthrob to be self-deprecating, self-aware, handsome, and the owner of a penis with a “girthy root.” Seth said he saw Zac’s member while shooting a scene where they were crossing streams in a bathroom, jokingly telling Howard, “I would’ve fucked him.”

“Neighbors” centers around a couple, Seth and Rose Byrne, who find themselves living next to a frat house and all the noise that comes with it. Seth and his longtime writing partner Evan Goldberg produced and helped write the film. He told Howard he’s very happy with the finished product.

One scene that Seth described sounded very funny to Howard – unfortunately it wound up on the cutting room floor. He said it involved the fraternity accidentally burning down their frat house after arranging a Civil War reenactment where they shot bottle rockets out of their asses as the opposing side.

Seth revealed he has nightmare neighbors of his own in real life, but admitted he wasn’t always the easiest neighbor to get along with, either. For instance, he remembered stuffing a neighbor’s mail slot full of McDonald’s hamburgers when he was a kid.

Up next for Seth is a Pixar-like animated movie called “Sausage Party” about the life and relationships of grocery store food. He said the movie is so out there and so dirty that Sacha Baron Cohen himself described an early cut as the craziest thing he has ever seen. There’s even a graphic food-on-food sex scene in the film that Seth described as the dirtiest thing he’s ever done.

After starring in the PG-13 movies “The Green Hornet” and “The Guilt Trip,” Seth said he’s happy to be back making R-rated comedies. He did say, however, that he used his downtime during “Guilt Trip” to write the hit R-rated feature “This Is the End.”

Seth also talked about recently going before the U.S. Senate to speak in support of Alzheimer’s research, as his mother-in-law suffers from the disease and the cause is close to his heart. His testimony became the second-most watched video in the history of C-SPAN.