It was raining in New York City this morning, so, naturally, Al Roker materialized in Howard’s studio!

Al has been a friend of the show for some time, and Howard wanted to finally pull back the affable weatherman’s curtain and get his uncensored thoughts on the hot button issues of the day. 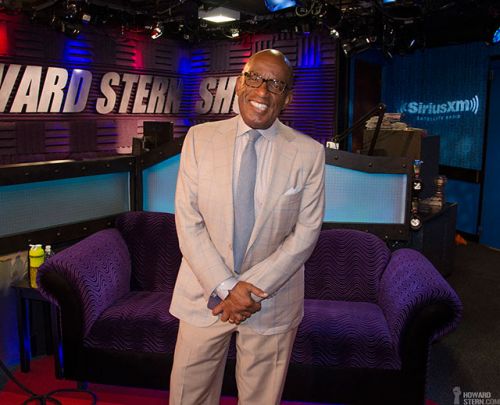 ROKER ON THE HOT SEAT

Did Al vote for Barack Obama?

Al would not say.

Is Al a Democrat or a Republican?

@sternshow It is entertaining how rapid fire Howard goes with questions to @alroker to try & get a “controversial” opinion out of him.

Will Al vote for Hillary Clinton?

He’ll wait to see what happens during the campaign.

How about Chris Christie?

He’ll wait to see what happens during the campaign.

He’s not anti-gun, but he thinks they could do better registration.

Al said it doesn’t look good for him. Al also went as far as to say that he wouldn’t use Pistorius’s bathroom.

What are Al’s thoughts on Justin Bieber using the N-word?

Al is inclined to forgive him because he was just 15 years old at the time.

Should there be horse-drawn carriages in Central Park?

Al says perhaps if there was a little area that kept them away from traffic.

Now, you don’t have to wait for Al to come onscreen during the Today Show to get your Roker fix, since he has a brand new app called ‘Al’s Weather Rokies’. It’s a game where you have to fight through various weather cartoons in order to wake Al up so he doesn’t miss his show ‘Wake Up with Al’.

Speaking of weather, Al and Matt Lauer are both co-starring with our own Benjy Bronk in the upcoming ‘Sharknado 2’, but Al assured New York and the rest of America that an actually Sharknado is unlikely. Easy there Al, you don’t want to offend the believers!

Al had to hot-foot it over to his morning TV show, so he said goodbye early. Howard and Robin assured him that they are officially the two newest Weather Rokies!

ROBIN QUIVERS: A WOMAN IN LOVE