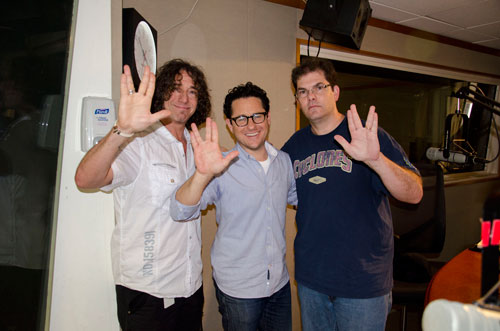 Ralph Cirella, Howard’s stylist and the host of Geektime had perhaps the most fun of anybody at Comic Con.

No, we’re not talking about his new ‘Better Call Saul’ bobble head, we’re talking about getting his rocks off with some Grade A celebrity shrapnel.

He went to a party and glommed onto the guy who plays ‘Arrow’ in the TV series of the same name. Since that was married, all the hot chicks who threw themselves at him were rolled off onto Ralph. Naturally, since Ralph can get the most out of almost any situation, he ended up hooking up with a hot Spanish chick. She ‘rubbed’ him a little bit and they made out and the fun continued at Ralph’s hotel room, where they did ‘a little bit of everything’.

Howard naively asked if Ralph was ever going to call her. Ralph shot back ‘I don’t even know who she is!’

Nicole Bass, the world’s biggest female bodybuilder, called in just to express her sincere doubt that Ralph’s story was in any was true. Who knows why she was so invested in Ralph’s sex life, but she was certainly insistent.

Ralph, in the same annoyingly nonchalant way he treats everything, didn’t care what Nicole thought.