Howard may have already given his co-host Robin Quivers an early birthday present but he had one last surprise for her on Wednesday’s Stern Show – a mystery guest. With only their silhouette showing, Howard began giving Robin clues about who her mystery guest could be.

“The person behind that curtain, Robin, is a legend and a legendary performer,” Howard told her. “A sex icon who left his honeymoon earlier just to honor you, for real.”

“I know who it is! David Hasselhoff!” Robin exclaimed. “Once I put it all together I knew because he just got married.”

David Hasselhoff did indeed fly in from Italy where he was honeymooning with his new wife Hayley just so he could celebrate Robin’s special day. “She’s the only person who would keep me out of bed with my wife,” David joked.

Though it’s Robin who’s usually doing the singing in the Stern Show studio, Hasselhoff took the mic and serenaded her with a cover of David Bowie’s classic “Heroes.” Watch his performance in the video (above). 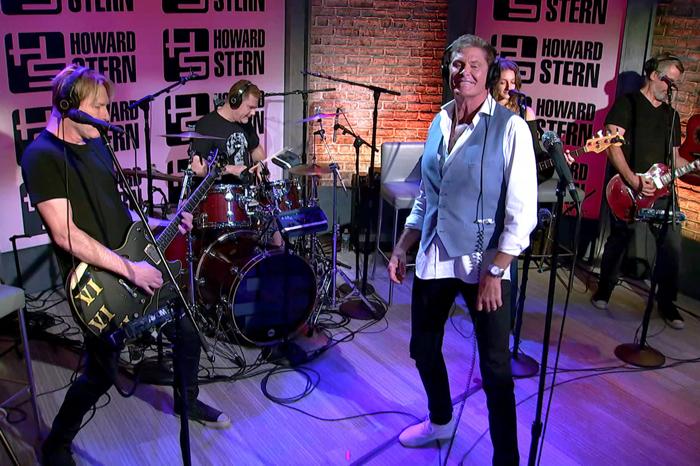 Playing guitar beside David was producer and music composer Tyler Bates who’s not only worked extensively with rocker Marilyn Manson but has also created the scores for several dozens of films, including “Deadpool 2,” “John Wick,” and “Guardians of the Galaxy.” It was on “Guardians of the Galaxy Vol. 2” that Tyler first met David.

“James Gunn asked me to do a disco version of the main theme,” Tyler told Howard. He gave the director what he wanted, teaming up with Hasselhoff for a ‘70s-sounding track complete with a retro music video starring the Hoff himself.

In July, news broke that Gunn had been fired from the upcoming “Guardians of the Galaxy Vol. 3” after tweets the director wrote years prior resurfaced and drew the disapproval of many. Tyler told Howard he stands behind Gunn, though, and called the criticism of him a “bullshit characterization.”

Hasselhoff also voiced his support for Gunn, telling Howard, “He’s the reason that I’m here. He put me in ‘Guardians of the Galaxy’ because he saw ‘Knight Rider’ when he was 8 years old.”

David became a household name in the 1980s after starring on “Knight Rider” for four years. His fame as a television star had several perks, one of which he admitted to Howard was his ability to get women. He shared a story about the time a Universal Studios tour bus drove by the “Leave It to Beaver” house and those onboard noticed KITT, the famed car from “Knight Rider,” parked in the driveway.

“I was having fun in that house,” David said with a laugh.

“You did something dirty in the ‘Leave It to Beaver’ house?” Howard asked.

Click here to download David Hasselhoff’s “Heroes” and check out his series “Hoff the Record” on Netflix.