If there's going to be an all-female "Expendables" spin-off, these are the women we want to see kick ass on screen 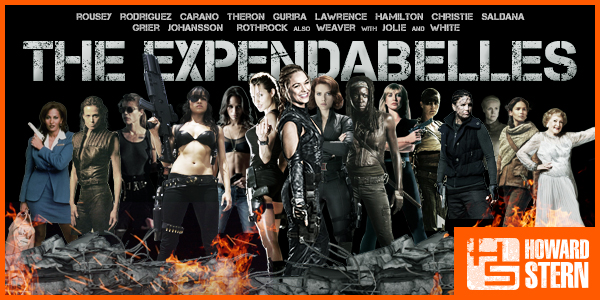 Ever since Sylvester Stallone put together his Nostalgia Avengers in the first “Expendables” movie, there has been talk of an all-female, all-star spin-off film dubbed “The Expendabelles.”

In honor of UFC champ (and “Expendables 3” alum) Ronda Rousey’s visit to the Stern Show, we’ve organized a dream roster of ass-kicking women to put Sly’s crew to shame.

Who better to be the new team’s ringleader than a woman who knows her way around an actual ring? Current UFC Bantamweight Champion and Olympic Judo medalist Rousey cut her teeth in Stallone’s gang and is ready to branch off on her own.

Street Cred: Not only did Rousey appear in “Expendables 3,” but she went toe-to-toe with Michelle Rodriquez in “Furious 7.”

Role on the Team: The leader

When your debut film is a boxing flick called “Girlfight,” you know you’re on the track to action hero stardom. Michelle proved so badass in the “Fast & Furious” franchise that they actually killed her character and brought her back to life because they needed her so badly. And they call The Rock “franchise Viagra.”

Street Cred: In her downtime between reviving (literally) her character Letty in the “Furious” franchise, Michelle throws down on alien planets in “Avatar” and leads the revolution in modern grindhouse classics “Machete” and “Machete Kills.”

Role on the Team: The cocky loose cannon

Like Rousey, Gina looks convincing when she fights onscreen because she is the real deal. A Muy Thai fighter who earned her MMA stripes in Strikforce and EliteXC, Carano is a legbreaker trapped in the body of a model. Any wonder fans wanted her to be Wonder Woman?

Role on the Team: The Carl Weathers to Ronda’s Arnold

We’ve got the women who can deliver a convincingly real punch, how about we balance it with an Oscar winner? But don’t be fooled, Charlize can more than hold her own when push comes to shove and then quickly pivots into a takedown and armbar.

Street Cred: “Aeon Flux” proved she could carry a sci-fi action flick, but have you seen the trailer for “Mad Max: Fury Road”? Any woman who can steal the badass thunder from Max Rockatansky deserves to be here.

Role on the Team: The strong, silent type

It’s time movie fans discovered what fans of the “Walking Dead” already know. As Michonne, Danai is such a dreadlocked, samurai sword-wielding badass that she and Norman Reedus’ Daryl have stolen show out from under the original leads.

Role on the Team: The one whose intensity even scares her teammates

Another Oscar-winner with surprising action chops, J-Law has the distinction of carrying a multi-billion dollar action franchise on her shoulders, which basically punches your Expendabelles/Expendables ticket no questions asked.

Street Cred: Her “Hunger Games” character Katniss Everdeen is a force of nature, and Lawrence has even made her mark in the comic book world as the “X-Men’s” Mystique.

Role on the Team: The young upstart

The O.G. Sarah Connor redefined the role of the “girl” in the action movie universe by going from mousey diner waitress in distress to chiseled, doctor-shanking, walking PTSD (that’d be PRE Traumatic Stress Disorder in this case) in the span of one movie.

Role on the Team: The contact. The one the team goes to when they need gear, supplies, and other death-causing “stuff.” 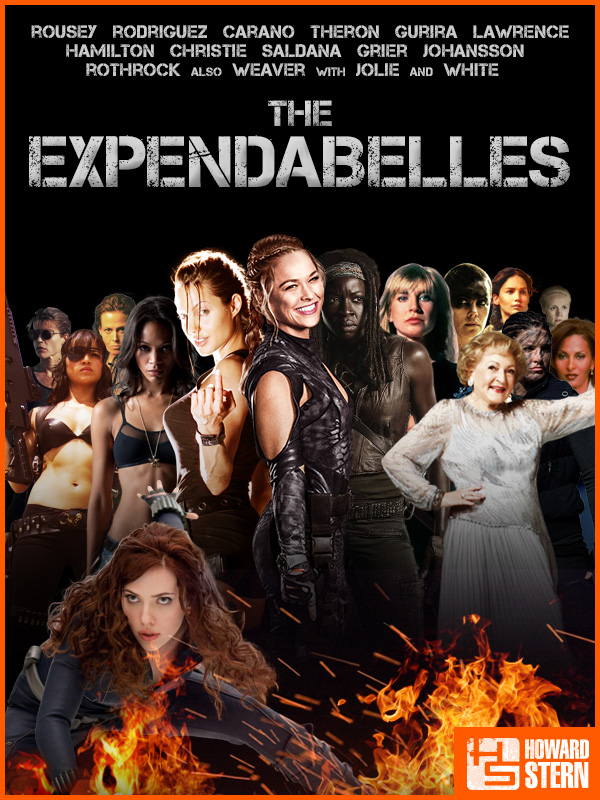 Standing 6’3″, Christie doesn’t need much to stand out in a crowd, even one with this kind of pedigree.

Street Cred: “Game of Thrones” – in a fantasy world filled with catty queens and prostitutes, Gwendoline’s Breanne of Tarth is an armor-clad warrior with an ever-growing kill list. Oh, and she’s going to appear in “Star Wars: The Force Awakens” as a chrome-plated Stormtooper called Captain Phasma!

Role on the Team: Since she’s already basically a cross between Dolph Lundgren and Brigitte Nielsen anyway, she’s perfect as the team’s tank

When casting directors are looking for women of this world and other worlds who can act, who can be jaw-droppingly gorgeous no matter what color she’s painted, and who can kick super-powered ass, they turn to Zoe. This team is no different.

Street Cred: Check her out as green assassin Gamora in “Guardians of the Galaxy” or blue eco warrior Neytiri in “Avatar” or just regular ol’ neck-snapper Zoe in “Colombiana” and “The Losers.”

Role on the Team: The possible double agent with her own agenda

This whirling dynamo has been through the hell that is the entertainment industry and has come out with zero battle scars and her sense of humor fully intact. If there’s a purple heart for actresses, Betty gets it.

Street Cred: Anyone else on this list pitch a hidden camera prank show in their 90s? Didn’t think so.

Role on the Team: “Sarge,” Ronda’s old mentor and confidante. Picks up a rocket launcher in Act Three (SPOILER!)

Former child stars are supposed to be well into their eighth rehab stint by the time they turn 30, not fully-immersed in the world-conquering Marvel Cinematic Universe. Oh, hey, in the time it took you to read this, “Avengers: Age of Ultron” made another billion dollars.

Street Cred: In the past year or so, Scarlett has not only starred as Marvel superspy Black Widow in “Age of Ultron” and “Captain America: The Winter Soldier,” she also delivered the adrenaline rush “Lucy.”

Role on the Team: The international lady of mystery

You probably don’t know her name, and that’s why she’s here. It’s more than past due that Rothrock’s contribution to kung fu movie history gets the recognition it deserves. She’s been crushing it (and by “it” we mean “larynxes, thigh bones, and jaws) since the early 80s, fronting grindhouse karate movies alongside the likes of Chuck Norris and Jackie Chan back when women were still relegated to wives and girlfriends of the hero.

Street Cred: She’s been in movies with titles like “Angel of Fury,” “Rage and Honor,” and “Lady Dragon.” No rom-coms here.

Role on the Team: “The Boss.” The one who hands Ronda and the crew their marching orders.

Heroes are only as good as their villains, and our dream “Expendabelles” movie would feature the main crew going up against a cabal of evil women with enough intimidation power to send Jason Statham back to the safety of Guy Ritchie movies.

In a cruel twist, sci-fi action goddess Weaver has designs on world domination by any means necessary

It’s not a surprise that when Disney wanted to bring one of its animated witches to life, they turned to Angie. We’re still not convinced she doesn’t actually possess magic powers.

Street Cred: Gotta give Jolie credit for having the stones to take on the single most iconic video game action heroine of all time in two “Lara Croft: Tomb Raider” films.

The ultimate blaxsploitation icon would be almost too much to handle if she worked alone, much less alongside Weaver and Jolie. As a matter of fact, screw it – we might just root for the bad girls.