From her Oscar-nominated turn in “Bridesmaids” to her slapstick sketches on “SNL,” when McCarthy falls, the world laughs 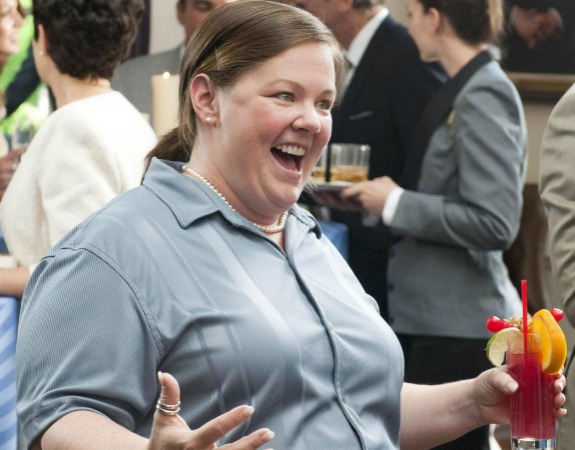 A casting consensus is hard to come by, but when news first broke of an all-female “Ghostbusters” reboot, there was one name on everybody’s lips: Melissa McCarthy.

Why? Because she is f*cking hilarious, especially when it comes to physical comedy—something the original film relied upon to great effect. Can you just imagine Melissa crossing proton streams with the gals of “Ghostbusters” or taking a shot of ectoplasm to the face? Anyone who has watched her crap in the sink in “Bridesmaids” or take a table dive on “Saturday Night Live” knows McCarthy is without question the PERFECT fit for this role.

Sure, there are a ton of comedians capable of falling down and getting a laugh. But these days, there is no woman (or man for that matter) who is showcasing his or her physical comedy chops quite like Ms. McCarthy is, which is why we consider her to be the best.

And here are 15 GIFs to prove our case:

THE “SPY” WHO FELL ON ME

Before she suits up and takes on the paranormal in “Ghostbusters,” Melissa is teaming with director Paul Feig once again in “Spy.” If the trailer is any indication, Melissa will be back to turning her pain into our pleasure.

During her last appearance on the Stern Show, Melissa told Howard just how big an influence “Saturday Night Live” had on her while growing up in Illinois. “They would just embarrass themselves and they wouldn’t care and it was so cool to me that they didn’t care,” McCarthy explained in 2014. She hosted “SNL” for the first time on October 1, 2011 and stole the show by never once caring what anyone would think about her performance. She just wanted to be funny and she succeeded. She also got a face-full of ranch dressing.

Melissa has now hosted “Saturday Night Live” a total of three times, each time earning herself an Emmy nomination. Yeah, she’s that good. Perhaps the greatest example of her ability to turn a fall into a funny is her portrayal of Lulu Diamonds – a Mae West-like movie star whose enemy was clearly stairs.

Her trouble with staircases carried over onto her CBS sitcom “Mike & Molly.”

The same year Melissa earned her first Emmy nod also happened to be the year she announced the nominees alongside Joshua Jackson. In order to prepare for her early morning duties, Melissa was trained by Joel McHale—which included a few punches to the face.

When Melissa came back to host “SNL” in 2013, she came out for her monologue wearing some sky-high heels. Viewers probably expected her to fall but probably no one expected Melissa to hit the Studio 8H stage as hard as she did!

WET BEHIND THE EARS

Before hitting it big, Melissa performed improv at The Groundlings in Los Angeles for over a decade and told Howard that she, “loved every minute of it.” But every time “SNL” would come to the club to recruit upcoming talent, Melissa would not be in that night. “It was a little soul crushing,” McCarthy said. Luckily, she got her gig on “Gilmore Girls,” showed America just how hilarious she is and the rest is history.

One might think Melissa’s stunt double took the brunt of the blows in “Identity Thief” but fans should also know that Jason Bateman accidentally chucked a real panini press at his co-star while filming this scene.

LOSING HER LUNCH FOR A LAUGH

Most of Melissa/Megan’s laughs in “Bridesmaids” came in the form of ridiculous one-liners but there was plenty of physical humor implemented as well.

After striking box-office gold with “Bridesmaids,” Melissa and Paul Feig decided to pair up again, this time in 2013’s “The Heat.”

We’re not surprised Melissa took home the Emmy for Lead Actress in a Comedy in 2011. We are surprised however that she was able to walk up on stage after putting her body through so much punishment on her show “Mike & Molly!”

In 2014, Melissa and her husband Ben Falcone got to finally make the movie they had been writing together for years. “Tammy” paired McCarthy with an all-star cast including Susan Sarandon, Kathy Bates and Dan Aykroyd.