Actor and comedian Bob Odenkirk made his Stern Show debut Wednesday to chat with Howard about his early days in improv and sketch comedy, his work on the award-winning dramas “Breaking Bad” and “Better Call Saul,” and his new action-packed thriller, “Nobody.” “John Wick’s” Derek Kolstad penned the script for “Nobody,” which follows a seemingly ordinary dad who exacts violent revenge upon criminals who invade his home and terrorize his family, but Odenkirk told Howard the idea for the story was his and based on his own experiences after he and his family survived a real-life home invasion.

“There’s so many things that led to me asking ‘Can I try to do an action movie?,’ and one of them was I had all these intense feelings inside me from these break-ins that my actual family had here in Los Angeles,” he told Howard on Wednesday morning, adding, “I was the dad who always wondered if I could’ve done more, if I should’ve done more. It led to a lot of anger and frustration.”

Like his counterpart in “Nobody,” Bob did his best not to engage with the perpetrators of the crime, but it still took an emotional toll. “Years later, you’re like bring me that guy. Give me one shot at that guy,” he continued. “It doesn’t matter that you kept the damage to a minimum. It doesn’t matter that you did the right thing. Some part of you desperately would love to beat the living shit out of that person for doing what they did, for willfully coming into your home and disrupting everything and traumatizing your kids.”

While the revenge fantasy aspect of “Nobody” appealed to Bob for obvious reasons, he told Howard he also believed he was ready for an action role after playing the lovable but unscrupulous defense attorney Saul Goodman for so many years on “Breaking Bad” and “Better Call Saul.” “He’s kind of got the components of an action hero,” Bob said, explaining Saul is persistent, cunning, has a good heart, and always manages to survive. “Everything except the fighting is kind of there.”

Still, Bob wasn’t sure studio execs would go for his pitch. “I thought I’d get thrown out of the room. I thought people would laugh in my face,” he said. “But everybody pretty much that I went to—starting with [my manager]—said, ‘I see what you mean.’”

Going From Somebody to ‘Nobody’

Transforming into an action star was neither easy nor quick for Odenkirk, who was well into his mid-50s when the project began development. Inspired by Jackie Chan in “Police Story” and Keanu Reeves in the “John Wick” franchise, he attempted to do as many of his own stunts as possible. He ultimately spent over two years training for the role in the gym and with his crew of stunt experts.

“I had a long way to go,” he told Howard. “The hardest part was not the hours just doing the same movement over and over, it was feeling like a fool, being in the corner of the gym going, ‘What the hell is wrong with me? There’s no way I’ll get there.’”

Odenkirk trained at a gym whose members are some of Hollywood’s biggest action stars. “Keanu is training with his team for ‘John Wick, and [Jason] Statham comes walking through and says hi to you, and you’re like ‘Look at that guy and look at me,’” Odenkirk said. “And Halle Berry is there training, being amazing and physical and dancing around and flipping, and you’re like in the corner, sucking—and you can see because there are freaking giant walls of mirrors showing you how bad you are.”

Unlike the other action stars he shared the gym with, Bob got his start in comedy. He told Howard he dabbled in stand-up a bit in the early ‘80s but wasn’t much good at it. His real passion was writing sketches. Bob met and befriended Stern Show veteran Robert Smigel while studying improv in Chicago and that connection eventually helped him land a writing gig at “Saturday Night Live.” While crafting material for the world’s biggest sketch-comedy show might be most sketch writers’ dream, he told Howard it actually wasn’t a great fit for him and he had several run-ins with creator Lorne Micheals.

“It all comes out of insecurity, Howard,” Bob said, explaining he was immature and feared failing. “I just wasn’t right for the show at the time. I do wish I could understand my own psyche, my own psychology better, and had enjoyed it and embraced it a bit.”

“It’s an institution that needs to show up every Saturday night and serve the whole country … and I just didn’t get on board, man, and I was a dick to Lorne,” he continued. “He’s trying to run a friggin’ meeting and get a goddamned show up on Saturday night and here’s this asshole, who should be a waiter in Chicago, making wisecracks out of his mouth, going ‘That scene sucked.’”

Bob is on better terms with Lorne these days and has come to appreciate what he’s done for so many sketch comedians. “He loves great writing, and great writers, and he supports them,” he told Howard. “Hey, he let me stay there for four years—that’s crazy.”

The Motivation Behind the World’s Most Famous Motivational Speaker

Odenkirk might have regrets about his “SNL” days, but most of the show’s fans don’t. He’s created or contributed to several legendary recurring sketches, from “Da Bears” to Dana Carvey’s beloved take on “The McLaughlin Group.” None resonates more so than Matt Foley, motivational speaker, a character he created for Chris Farley while they were both at Chicago’s Second City. He told Howard he was inspired after seeing Farley play an overzealous coach trying to keep kids off drugs. Suddenly, he had an idea for a similarly mannered character who lived under a bridge—just like the burnouts did in Odenkirk’s hometown of Naperville, Ill.

“Tony Robbins was becoming big at the time and I thought what about a motivational speaker whose living [under the bridge] and he uses himself as, like, ‘I’m a piece of shit. You wanna end up like me?’”

The sketches didn’t start airing on “SNL” until the season after Bob left, but he saw Chris embody Foley plenty of times in Chicago. “My daughter once asked me what’s the most fun I’ve had in show business, and I said without a doubt it was Second City theater, main stage, doing that sketch seven times a week with Chris right in your face. He would not stop until he made every actor on stage laugh,” he recalled. “I’ve never seen an audience go from, you know, just an audience who’s enjoying a show to like worshipping a guy in four minutes.”

A Clash of Shakespearean Proportions

Another of Odenkirk’s hilarious “SNL” anecdotes was funny for all the wrong reasons. When Jeremy Irons hosted the show in 1991, the Oscar-winning thespian apparently got quite angry with the underwhelming monologue he and Rob Schneider had written for him. “It wasn’t great,” Bob acknowledged with a laugh. “He was really mad. He was so mad.”

If the 30-year-old flare-up sounded fresh in Bob’s mind, it was probably because he’d listened to it dozens of times since then. “I taped it. I had a little recorder and taped it,” he told Howard before reiterating the fact Jeremy was ultimately a good sport about the whole thing and still delivered the monologue even though it was no good.

It was Odenkirk’s work on a different sketch comedy series, “Mr. Show,” which unexpectedly paved the way for his career in drama. “Breaking Bad” creator Vince Gilligan was apparently such a big fan of Bob’s work he offered him the part of the show’s slimy but loveable defense attorney Saul Goodman without even asking him to audition. As Bob explained it, he signed on to be a major player in “Breaking Bad’s” second season without ever having seen a second of the show.

“I’d only seen the billboard with Walter White in his underwear. I called a friend … to ask them, ‘What is this thing? Should I do it?’” he told Howard. “And I was gonna do it, just to be clear, I was going to take that cash.”

The first time he watched the show was while flying to the set in Albuquerque. “I wanted to make sure I got the tone right. I understood it was a drama and also saw my character was very funny … and then, of course, I dialed it in a lot more when I got in the room with Bryan Cranston. He’s fucking doing a masterclass 10 feet from my face and I’m like I better amp up my game here and show up.”

Considering his background in improvisational comedy, Howard wondered if his guest was prone to adlibbing on the “Breaking Bad” set.

“I really, really, really try to do the script exactly as written. You know why, Howard? I got that first script from Vince and immediately started fucking with it, just like a comedy writer does,” he recounted. “Somewhere in the middle of it, I said, ‘You know what? Hey, what if you tried to be an actor? What if you just tried? Would that be okay once in your life, you fucking clown?’”

He then made it his mission to stretch himself, live in his character’s skin, and say the words exactly as they’re written on the page. “It’s a trip. You really become someone else after a while, and that’s the thing that’s cool about acting,” Bob said.

The Kids Are Alright

Walter White’s (Cranston) journey came to an end after six seasons of “Breaking Bad,” but Odenkirk’s character Saul Goodman lived on as the centerpiece of Vince Gilligan’s spinoff show “Better Call Saul.” The award-winning prequel is currently in production on its own sixth-and-final season, but as Bob explained to Howard the series almost never came to pass.

“I did say no to it and my kids convinced me to do it,” Bob told Howard, explaining he initially wasn’t comfortable leaving his family to shoot for such long stretches in Albuquerque.

All that changed after his children overheard him on the phone with his manager, turning down the starring role. “My son looks at me and he goes, ‘So, dad you’re not going to do that show?’ I go, ‘No, son. I’m not, I don’t think we’re ready for that. He goes, ‘Well, you’re going to disappoint a lot of people. I go, ‘Well, I’m going to disappoint a lot of strangers,’ and he goes, ‘Well, some of them are my friends,’” Bob recalled with a laugh.

Later, his daughter helped him realize any show created by Gilligan and his brilliant team would likely be an exceptional one. “There’s gonna be excellence in there, even on their worst day,” he recalled telling her. “And she said, ‘You should do it.’”

So, the actor picked up his phone the next day to tell his agent he’d changed his mind. But his agent phoned him first with an even more lucrative offer from the show’s producers. Odenkirk could barely believe it. “The deal’s gone up, and I’m already going to say yes!” he told Howard with a laugh.

“Nobody” is playing in theaters now and arrives April 16 on demand. 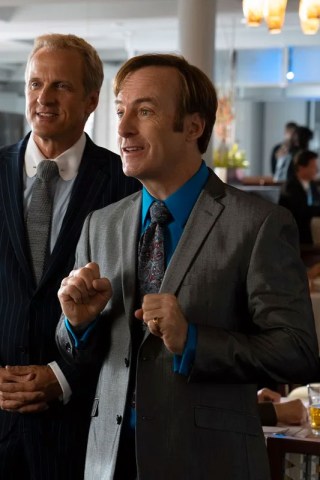 Bob Odenkirk Has a Secret on ‘Better Call Saul’ 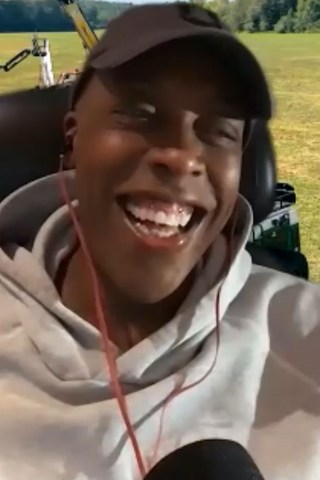 Arsenio Hall Talks 'Coming 2 America'
You Give us your email Address we'll give you even more howard!