Michael Che’s origin story doesn’t read like that of most “Saturday Night Live” superstars. The 37-year-old stand-up and co-head writer of America’s longest-running comedy show neither honed his writing chops at Harvard, as Al Franken, Conan O’Brien, and (his “Weekend Update” co-anchor) Colin Jost had before him, nor learned sketch comedy on the improv stage, like Second City legends turned “SNL” vets John Belushi, Chris Farley, and Tina Fey. No, Che, who grew up in the Lower East Side eating rice and toast with honey while his mom worked three jobs and his siblings helped raise him, only started doing stand-up after tiring of the fine arts. He’d found a modicum of success selling “pop-art” portraits on the street. Filmmaker Spike Lee apparently liked his work so much he gave Michael his card. The son of fashion designer Tommy Hilfiger went a step further and helped him land a job at his dad’s company. But his heart wasn’t in it. He never called Lee and didn’t stay at the Hilfiger job for long.

“Art never felt natural to me,” Che told the Stern Show on Tuesday morning while connecting from his 30 Rock office. “It was something that I liked to do, and I knew I was close to it, but it wasn’t until I tried stand-up that I was like, ‘Oh, I speak this language.’”

Howard imagined it took a great deal of courage to walk away from a potentially lucrative career with a billion-dollar brand.

“It’s crazy now that I’m [almost 38], but then as a kid, you don’t know. You think opportunities come,” Michael said. “You think you have nothing but time.”

The gutsy gamble paid off, of course. He caught the stand-up bug in 2009, appeared on “Late Show With David Letterman” in 2012, signed onto “Saturday Night Live” as a guest writer in 2013, and seemingly never looked back.

The better part of a decade later, he’s become one of the show’s most recognizable faces, has a Netflix stand-up special under his belt, and his own brand-new sketch-comedy show, “That Damn Michael Che” on HBO. Oh, and he’s also made amends with Tommy and Spike.

Though comedy felt natural to Michael, he quickly realized there was far more to it than writing funny jokes. Like all up-and-coming comics, he was thrown up on stage without so much as a training manual or orientation seminar. Thankfully, he received sage advice early on from legendary funnyman Tracy Morgan.

“Tracy has been an awesome kind of mentor,” Michael said Tuesday, recalling his end of an anecdote Morgan shared with Howard during his Stern Show visit last May.

Che said the talk came after he hosted a show for Morgan but failed to properly warm up the crowd. “I never really thought of it as a job. I just thought I was going first, and Tracy was going on. I didn’t realize I was serving the show,” Michael said. “Tracy was the first person to ever pull me aside, check my ego immediately, and say, ‘Hey, we gotta work on this.’”

Che once again faced a steep learning curve after “SNL” hired him as a guest writer.

“I thought I was getting coffee and bagels,” he told Howard with a laugh. “A ‘guest writer’? I didn’t know what I was doing. I thought I was parking cars.”

While one of Michael’s sketches did make it to air his first week, the writers’ room remained “extremely intimidating” to Che. He was one of only a few people who’d come from a stand-up background. Unlike his colleagues with Ivy League pedigrees and years of improv training, he didn’t know the first thing about sketch writing. “I’m a stand-up!” he told Howard.

Fortunately, he received plenty of on-the-job training. “The thing about ‘SNL’ is … if you have a funny idea they will figure out how to make it work for the show. Then you can watch, and you go, ‘Oh, okay, okay,’ and you keep all that stuff in mind the next time you write a sketch,” he said.

The show’s lack of diversity didn’t end there, either.

“When I first got here it was just Kenan [Thompson] and Jay [Pharoah] in the cast, but there was no Black writers,” Michael said. “If I were to write—or if a Black writer were to write—something that’s specific to Black humor, an all-white staff might not get the joke, so it’s deemed not funny, so it doesn’t go on the air.”

Seemingly funny sketches can miss the cut for a variety of reasons, of course. Sometimes it’s simply because the audience—which may be there just to see that week’s musical guest—doesn’t laugh hard enough during the dress rehearsal. Howard and Michael discussed a few such casualties, including one sketch Che wrote about the first Black guy to boo baseball pioneer Jackie Robinson and another he penned about climate change-denying dinosaurs.

Thankfully, Che now has a second platform—”That Damn Michael Che”—capable of catering to different sensibilities and, on some occasions, giving his cut sketches a second chance. One such revived sketch centered on superheroes accidentally killing an unarmed Black teenager.

“For obvious reasons, there’s no way that’s going on [‘SNL’],” Che told Howard. “Something that’s like racially specific, the audience is kind of looking at ‘Saturday Night Live’ as Lorne Michaels’ show. They’re not looking at it as black writers making a nuanced observation … On my show, I can get away with it because they know it’s me.”

For millions, Eddie Murphy’s “Saturday Night Live” return last December was a Christmas miracle. For Che, it was nerve-racking.

“I can’t go back home if that show’s bad,” he told Howard. “Literally, my family will be more mad at me than Eddie, you know. ‘You ruined Eddie Murphy on “Saturday Night Live!”’ Yeah, it was crazy.”

Michael wrote a lot of material for Eddie that week, from his opening monologue to his Gumby return on “Weekend Update.” Howard wondered how exactly one went about writing jokes for an all-time great.

“You suggest a monologue. You don’t write a monologue,” Che laughed, explaining he wrote the whole thing on his own first and then gave it to Eddie, who picked out the parts he liked. Making things extra complicated, Chris Rock, Kenan Thompson, and Dave Chappelle needed to be worked into the monologue, too.

Safe to say, it was a memorable show.

“I remember trying to go into my dressing room to just take like a 10-minute break. I open the door and Chappelle and Chris Rock are eating sushi in my dressing room,” he told Howard. “It was crazy. Chris called his mom from my dressing room to say, ‘Mom, I’m at the Eddie Murphy Show … It was like that kind of special for everybody.”

“I saw Eddie Murphy and Dave Chappelle host ‘SNL,’” Michael added. “I don’t know how you top that.”

Howard, like many “SNL” lovers, is a big fan of Colin Jost and Michael Che’s running “joke swap” gag in which the “Weekend Update” anchors write edgy jokes for each other and then read them—for the very first time—live on the air.

“For Colin, I like to kind of go past the line,” Michael laughed.

Howard was curious about the segment’s origins.

“We had darker, harder jokes that we like to do, but every time we do it we would ice the audience,” Che said. “Then, one time, it was like, ‘We should do this thing for Christmas where we just tell a dark joke and just say, ‘Hey, this is just a joke that got cut that we want to tell.’”

“Every joke killed,” he recalled.

Though Colin was the one who came up with the joke in the first place, Michael thought his jokes often hit the hardest. “I wrote the most awful stuff,” he recalled of their very first “Joke Swap.” “I started reading his jokes and they were all kind of mild … [but] I had him saying the worst thing and his head’s in his hand and he’s just like, ‘Oh God, you’re going to get me killed.’”

“Absolutely not,” Che laughed. “You can have them all.”

“Famous relationships seem miserable to me,” he continued. “It’s a very, very hard thing to do. Like, if you’re in love and it’s beautiful, I totally get it, but for me … that seems like so much work.”

Jost met Johansson while she was hosting “SNL,” and Che could understand how Studio 8H might be an easy place for celebrities to fall for one another. “You get to be a regular person here. You get to see people for who they are here,” he said, explaining it’s a far cry from the paparazzi and party-filled lives many stars lead on the outside.

Howard heard a rumor about Scarlett expressly forbidding Michael from throwing his co-anchor a bachelor party ahead of the celebrity couple’s low-key 2020 wedding. He wondered if there was any truth to it.

“She’s the best,” Michael laughed, suggesting she was probably just joking. “If you knew them, they’re the same people. They’re perfect for each other. For the same reason I love Colin, I love her.”

Howard then suggested “SNL” head honcho Lorne Michaels make another love connection by booking a guest host who could be a match for Che.

“No thank you,” Che laughed. “The sexiest thing a woman can ask me is ‘So, what do you do?’ That is beautiful,” he finished. “I just want a nice, boring librarian. Nobody famous.”

“That Damn Michael Che” is available now on HBO Max. 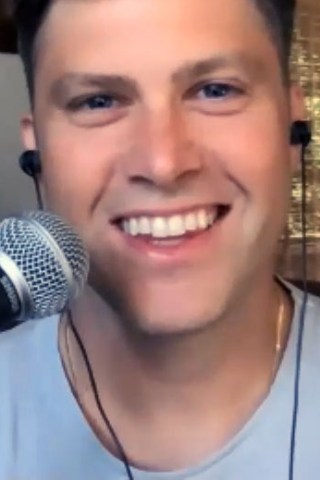 Colin Jost Gets Candid About Past ‘SNL’ Struggles